On Jul 21 , an honors convocation was held for students at WMU-Cooley Law School’s Tampa Bay campus who will be graduating  following the law school’s summer term. 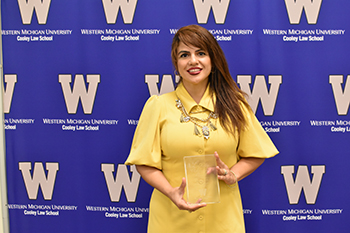 Margaret Hassan and Stephanie Ray were presented with the Leadership Achievement Award, which acknowledges those students who have consistently, comprehensively, and effectively provided leadership in a variety of capacities. The award is intended to be the culmination of the recipients’ participation in leadership activities at WMU-Cooley.

Hassan, originally from Chicago, Ill.,  earned her bachelor’s degree from Purdue University-Calumet-Hammond. She belonged to the Phi Delta Phi International Legal Honor Society and the Phi Alpha Delta Law Fraternity.  Hassan served in the student ambassador program and as a graduation marshal. She was a member of the Federal Bar Association, Student Bar Association, Florida Association of Women Lawyers, Hispanic Organization of Legal Advocates, and Moot Court.

Originally from Medellin, Colombia, Ray earned her bachelor’s degree from Mount Holyoke College. While at WMU-Cooley, Ray was a member of the Law Review, Hispanic Organization of Legal Advocates, Black Law Students Association, and the American Constitution Society. She served as a senator for the Student Bar Association and was inducted into the Phi Delta Phi International Legal Honor Society.

Hassan and Nina Yakubov were presented with the WMU-Cooley Alumni Association Distinguished Student Award. The award is given to selected graduating students based on academic accomplishment, professionalism, and ethics, demonstrated leadership at WMU-Cooley, meaningful extracurricular activities, and post-graduation plans. The recipients are selected by the past presidents and executive committee of the WMU-Cooley Alumni Association. The recipients were presented a diploma frame from the law school.