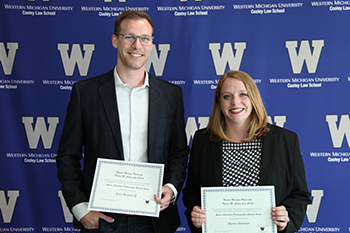 Elizabeth Anne Johnson was presented with the Leadership Achievement Award, which acknowledges those students who have consistently, comprehensively, and effectively provided leadership in a variety of capacities. The award is intended to be the culmination of the recipients’ participation in leadership activities at WMU-Cooley.

Originally from Grand Rapids, Michigan, Johnson earned her bachelor’s degree from Cornerstone University. While at WMU-Cooley she was a member of the Christian Legal Society, Organization of Women Law Students, the American Bar Association Law Student Division, and served various roles with Student Bar Associations. Additionally, she served in the WMU-Cooley Ambassador Program, and participated as a Mock Trial competition member.

During the convocation, the Alumni Association Distinguished Student Award was presented to Alyssa Andrews and Jesse Bergwerff.  The award is given to selected graduating students based on academic accomplishment, professionalism, and ethics, demonstrated leadership at WMU-Cooley, meaningful extracurricular activities, and post-graduation plans. The recipients are selected by the past presidents and executive committee of the WMU-Cooley Alumni Association. The recipients were presented a diploma frame from the law school.

Andrews, who was originally from Holly, Michigan, was also presented with the Student Bar Association Distinguished Student Award, which recognizes those students whose dedication to the student body, legal and academic community are examples which all law students should follow. She earned both bachelor’s and master’s degrees from Wayne State University. While at WMU-Cooley, she served as president of the Organization of Women Law Students and participated in the Oakland County Inns of Court.

Bergwerff, a U.S. Army veteran, hails from Hudsonville, Michigan, earned his bachelor’s degree from Calvin College. While at WMU-Cooley, Bergwerff served as a senator for the Student Bar Association and was a member of the law school’s Mentorship Program.