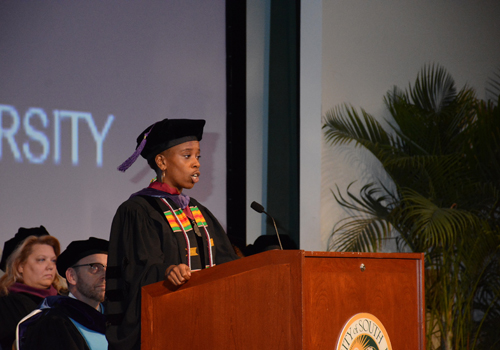 Speaking about character, Thomas, who was chosen by her classmates to provide the valedictory remarks, told graduates there may be a time when their character could be attacked.

“There should never be a time when your character falters,” said Thomas. “Your integrity, humility, and poise should be the answer to all questions, allowing nothing further to be maligned. We have crossed over to an elite group.”

While talking about the achievement that each of the graduates accomplished by completing law school, Thomas said that as a class they have crossed over to an elite group. “A group that many dream about, but few actually accomplish. A respected class of men and women who chose selflessness and advocating for people and society,” she said.  “When I look at you, I see greatness, drive, ambition, and determination to do what it takes to be successful and make a difference."

Schifino spoke about how those with power could make great change.  “Being a lawyer is the gateway to the power and the change.” He then shared three suggestions with the graduates.

"First, be true to yourself. Trust you'll be the best at that. It bears repeating because you'll face unique challenges in our profession. You'll be pulled in different directions, but don't get caught up in that. Second, in our profession, there will be times where you are overwhelmed by the moment. Your eggs will be scrambled. You'll feel frozen. We have chosen a stressful and challenging profession. Don't let it overwhelm you. Create your own toolkit to manage these moments.

"Finally, in a few months, you will become members of a noble and sacred profession. We are the ones to safeguard our form of government. We have spent the last 400 years developing and defending the rule of law of our land; righting justices; and preserving our republican liberties by keeping in check the powers of government.”

Each class at WMU-Cooley bears the name of a distinguished member of the legal profession. This graduating class is named after U.S. Supreme Court Justice David Davis. David was appointed to the Supreme Court by President Lincoln in 1862. His Tenure on the court lasted until 1877 when the Illinois General Assembly elected him to the U.S. Congress and he resigned his seat. He served in Congress until his retirement in 1883.