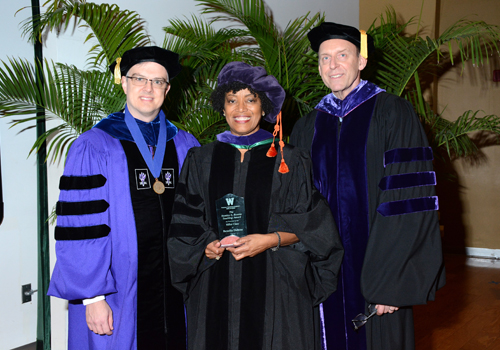 While addressing the graduates, McGrath spoke about the support each has received while attending law school.

“Your family, your support system, anyone and everyone who helped you get through law school, they know how committed you are to achieving your goals.” said McGrath. “You are joining a great profession with so many options to do good and do well for yourself.”

Chosen by his classmates to provide the valedictory remarks, Rodriguez spoke about how, as attorneys, each of the graduates will be able to impact the lives many individuals.

“Tomorrow will be about service. It will be about discovering what’s needed in our respective communities, taking a look around and providing practical, proactive knowledge and support in just about every fact of personal and professional life,” said Rodriguez.

Speaking about attorney reputations, DuBose shared why it is important for new attorneys to establish themselves as ethical professionals.

Each class at WMU-Cooley bears the name of a distinguished member of the legal profession. This graduating class is named after U.S. Supreme Court Justice Samuel Freeman Miller. On July 16, 1862, Miller became President Lincoln’s second appointment to the U.S. Supreme Court. During the Civil War, Miller upheld the war-time suspension of habeas corpus and trials by military commissions. His tenure on the court lasted 28 years. It is believed that Miller wrote more opinions than any other justice on the court.