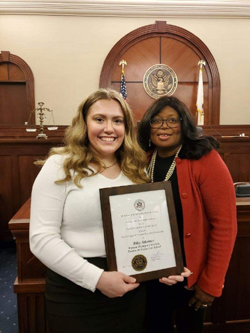 Stheiner, of Lansing, was honored with the $1,000 scholarship during a ceremony at U.S. District Court in Detroit. The Ralph M. Freeman Scholarship is awarded to a third-year law student in Michigan who has excelled in school competitions and/or been a service to Moot Court, Mock Trial, ADR, or similar activities. Now in its 22nd year, the scholarship is in memory of the late U.S. District Judge Ralph M. Freeman and his late wife, Emmalyn. Judge Freeman was appointed U.S. district judge for the Eastern District of Michigan in 1954 by President Dwight D. Eisenhower. He served as chief judge from 1967-72, took senior status in 1973, and continued to serve until his death in 1990.

WMU-Cooley Professor Martha Moore nominated Stheiner for the scholarship, stating she has “served with excellence on the New York Bar Association National Moot Court team, and won the WMU-Cooley Intraschool Moot Court competition in the Fall of 2021. Stheiner currently serves as WMU-Cooley’s Michigan campus Moot Court Board president, and is active in promoting student involvement in appellate advocacy.”

Before attending WMU-Cooley, Stheiner graduated from Grand Valley State University in 2019 with a Bachelor of Science degree in legal studies and criminal justice. She also served as legal assistant at Stenger & Stenger PC, student assistant at GVSU’s Seidman College of Business Dean’s Office, and legal intern for the City of Grand Rapids Attorney’s Office.