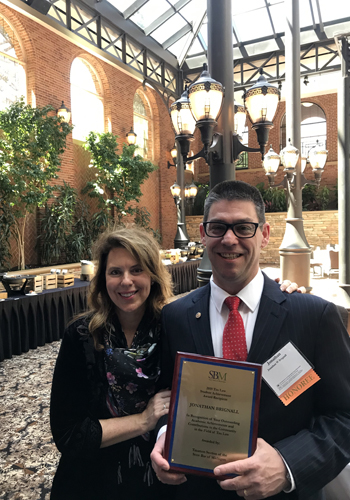 The Tax Law Student Achievement Award recognizes law students who have excelled in tax courses and who have been involved in tax-based community service.

Before attending law school full-time in May 2018, Brignall worked for the Internal Revenue Service as a revenue agent for 10 years.  For the last two semesters, he has volunteered at the Michigan Tax Tribunal where he performs legal research on various tax matters.  He has served on several non-profit boards, and has volunteered to assist several non-profits in preparing applications for tax-exempt status.

Brignall, a licensed CPA in Michigan, a member of the Michigan Association of CPAs and the American Institute of Certified Public Accountants, is a student member of the Taxation Section, State Bar of Michigan.  He earned both an MST in Taxation and an MBA from Grand Valley State, and a Master of Accountancy and a B.S. in Accounting from University of South Florida.

As winner of the SBM Taxation section, Brignall wrote a response to the question of what legislation Congress should pass in light of the U.S. Supreme Court’s 2018 decision in South Dakota v. Wayfair, Inc., in which the court approved the imposition of sales/use taxes on sales of property even if the seller has no physical presence in the taxing state. Writing competition participants from law schools across Michigan were evaluated on their research, analysis, persuasiveness, and writing ability.

“Jonathan is an exemplary student who has the respect of both his peers and professors,” said Gell. “I am proud and thrilled that he has been recognized by the SBM Taxation Section with these two awards.”

The awards were presented to Brignall during the Taxation Section’s annual conference at St. John’s Conference Center in Plymouth, Michigan.