On Feb. 28, in honor of World Rare Disease Day, and in support of student Marianne Drescosky, and Assistant Dean Lisa Halushka, who both have children with rare genetic diseases, Western Michigan University Cooley Law School’s Auburn Hills campus students, faculty, and staff were given permission by Associate Dean Joan Vestrand to wear jeans in place of business attire.  In addition, the law school hosted an information display about the importance of understanding gene disorders. 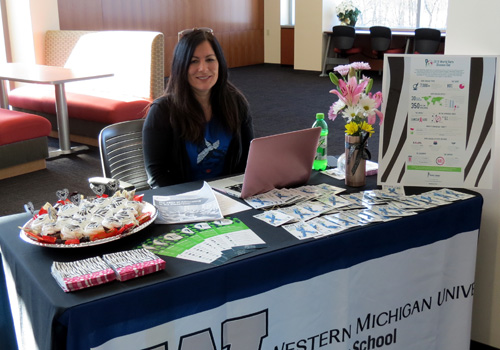 Sponsored by the nonprofit, Global Genes, World Rare Disease Day is used to increase awareness for rare diseases.  Drescosky whose son Brock has Progressive Pseudorheumatoid Chondrodysplasia, a joint disease that causes the articular cartilage in the joints to break down, spent the day sharing details about rare diseases caused by gene disorders.

“I was honored to be given this platform to share my story and the importance of creating a broader discussion around rare diseases,” said Drescosky.

The day also had a special meaning for WMU-Cooley Assistant Dean and Professor Lisa Halushka, who has two children with phenylketunouria (PKU), a rare disorder caused by a defect in the gene that helps create the enzyme needed to break down phenylalanine in the body.

“It was compelling for me to watch as the law school’s students, staff, and faculty came together to learn about gene disorders and their effects on the broader worldwide population,” Halushka said.

"As an institution, we are proud to support World Rare Disease Day,” said Vestrand. “The legal profession is a helping profession and to the extent we can raise awareness of these conditions, and their impact on those affected, the better.  Greater awareness is first step to better treatments, support, and protections, which lawyers are all about."