As WMU-Cooley continues celebrating its 50th anniversary throughout 2022, Michigan State Rep. Kara Hope presented a legislative tribute to the law school on the floor of the State Capitol on Nov. 30. 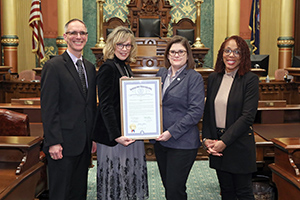 “As an alumna, it was especially meaningful to me to present WMU-Cooley Law School with a legislative tribute in honor of its 50th anniversary,” said Hope. “I value the education I received at Cooley; it has made me a better legislator.”

After graduating from law school, Hope served as a pre-hearing attorney in the Michigan Court of Appeals and later began practicing legal defense before returning to WMU-Cooley as an adjunct professor. She eventually started a solo practice in 2015, specializing in family law. Before being elected to the state legislature, Hope served as an Ingham County Commissioner from 2013 to 2018. Her interest in serving in the political arena came after volunteering to work on environmental issues.

“We are honored to have been presented the legislative tribute on the Capitol floor by Rep. Hope,” said Bill Arnold, WMU-Cooley Law School director of advancement and alumni relations. “Since the law school’s founding in 1972, we have taken pride in preparing more than 21,000 diverse graduates to be lawyers and leaders.”