WMU-Cooley Law School Professor Anthony Flores was sworn as judge for 54A District Court during a judicial investiture ceremony on Thursday, June 2, at the Tony Benavides Lansing City Council Chambers. 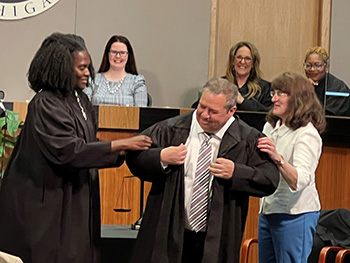 Flores, a 1992 graduate of WMU-Cooley, has taught at the law school since 2005 and most recently taught courses in criminal procedure and evidence and has served as vice chair for the law school’s Faculty Governance. Before joining WMU-Cooley, he was an assistant prosecuting attorney for Mecosta County, and was unit chief at the Ingham County Prosecutor’s Office where he handled child abuse cases.

Flores was appointed to the bench by Michigan Governor Gretchen Whitmer in March to fill the remainder of the term held by retired Judge Louise Alderson.