WMU-Cooley Law School announced today that President and Dean Don LeDuc will be retiring from that office, which he has held for 16 years.  Additionally, the law school has chosen former Michigan 29th Circuit Court Judge and retired WMU-Cooley Associate Dean Jeffrey Martlew as interim president beginning September 2018. LeDuc has been a WMU-Cooley professor since 1975 and served as dean from 1982-1987 and from 1996-present.  He became the school’s president in 2002. 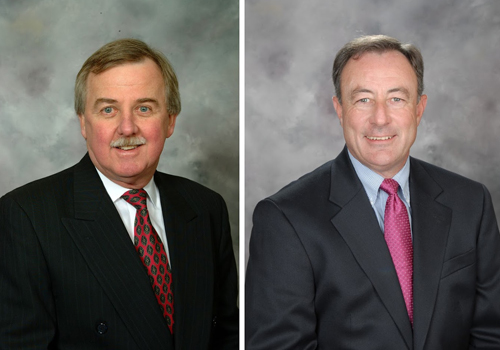 Martlew, a 1976 graduate of WMU-Cooley, is a former member of the WMU-Cooley board of directors. He retired as the founding associate dean of the law school’s Tampa Bay campus in 2016. Martlew first joined WMU-Cooley as an adjunct professor from 2005-2007, then was visiting professor until his appointment to the full-time faculty.  Beginning in 1993, he spent 14 years as judge of Michigan’s 29th Circuit Court serving Clinton and Gratiot counties. Martlew was named Chief Judge in 1994 and served in that capacity until 2007. Previously, he served as a 65th District Court judge for eight years in Clinton County, Michigan.

Initial planning is underway for selecting the law school’s permanent president and dean. The selection process will include an advisory committee constituted from the law school’s board, faculty, staff, students, alumni, and representatives of Western Michigan University.

About Western Michigan University Cooley Law School: WMU-Cooley Law School resulted from the 2014 affiliation that combined WMU's status as a nationally-ranked, public, comprehensive research university with the commitment to practical legal education of an independent, non-profit, national law school. WMU-Cooley is accredited by both the American Bar Association and the Higher Learning Commission of the North Central Association of Colleges and Schools. Since the law school's founding in 1972, WMU-Cooley has provided more than 20,000 graduates with the practical skills necessary for a seamless transition from academia to the real world.  WMU-Cooley enrolls classes in January, May, and September at its Lansing, Auburn Hills, and Grand Rapids, Michigan campuses, and its Tampa Bay, Florida campus. WMU and WMU-Cooley Law School operate as independent institutions with their own governance structure and separate fiduciary responsibilities.