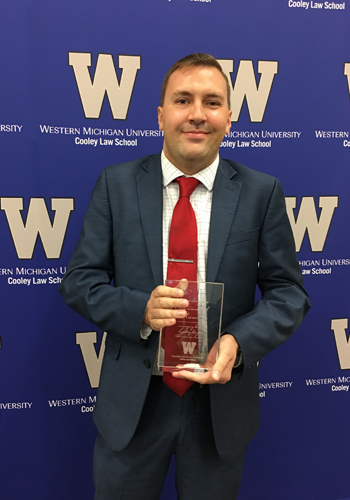 Byron S. Longworth (left), Athena Provenzano, and George G. Triantis were presented with the Leadership Achievement Award. The award acknowledges students who have consistently, comprehensively and effectively provided leadership in a variety of capacities.

Longworth, a Tampa Bay native and graduate of the University of South Florida, received the honor for chairing the Tampa Bay Mock Trial Competition, participating in the National Competition Team for Moot Court, and his membership in the international legal honors society, Phi Delta Phi. He was recognized for his hard work, dedication and service to the Moot Court Board, and spoke on behalf of Phi Delta Phi during the ceremony. Longworth was also honored for making the Dean’s List and Honor Roll.

Provenzano, originally from Thunder Bay, Ontario, and a graduate of Lakehead University, was honored for her involvement in the Student Bar Association, Sexuality and Gender Acceptance organization, Sports and Entertainment Law Society, Family Law Society, WMU-Cooley’s Ambassador Program, Mock Trial/Mock Trial Competition, and WMU-Cooley’s chapter of the Florida Association for Women Lawyers. In addition to the Leadership Achievement Award, Provenzano received a certificate of appreciation for volunteering as an ambassador in the WMU-Cooley Ambassador Program. She was also recognized for her service on the Student Bar Association Executive Board, and making the Dean’s List.

Triantis, a Silver Spring, Maryland, native and University of Maryland-College Park graduate, was selected for his role as treasurer within the Student Bar Association and the Sports and Entertainment Law Society, as well as being a magistrate coordinator and board member for Grade Appeals. He also received the Grade Appeals Board Award for assisting in the grade appeals process, and a Certificate of Merit Award for business planning. Triantis was also recognized for his service on the Student Bar Association Executive Board, and making the Dean’s List and Honor Roll.