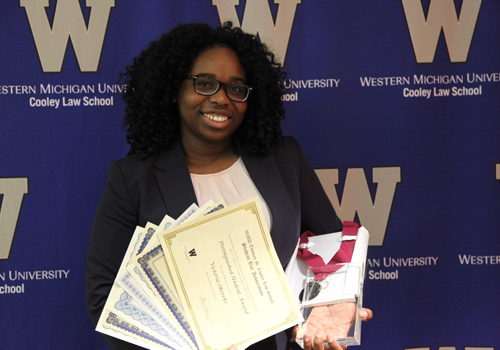 Yarenis Martinez received the WMU-Cooley Alumni Memorial Scholarship, which is awarded to a student based on need, character, and potential to become an outstanding lawyer. The scholarship, established in 1989 by the officers of the WMU- Cooley Alumni Association, is typically awarded to students in their second or third year of law school.

Megan Babut, Clarissa (Reese) Kewin, Jessica Lee, Victoria Okereke and Jameel Williams were presented with the Leadership Achievement Award. The award acknowledges students who have consistently, comprehensively and effectively provided leadership in a variety of capacities.

Babut, originally from Lansing, is a graduate of Grand Valley State University. During her years at WMU-Cooley, she has served as director and senator of the Student Bar Association, community service and secretary of the American Bar Association Law Student Division, master of the ritual of Delta Theta Phi Law Fraternity, managing resource editor of Law Review, ambassador for the Cooley Ambassador Program, member of Organization of Women Lawyers,  Black Law Students Association, Phi Delta Phi and the mock trial team, graduation marshal, writer for The Pillar and volunteer for Cooley for Kids.

Kewin, originally from North Dakota, is a graduate of Wayne State University. At WMU-Cooley, she has served as a member of Mock Trial Board, Phi Delta Phi, volunteer with Cooley Volunteer Corporation, ambassador in the WMU-Cooley Ambassador Program, and, as part of the school’s graduation marshal program, a marshal, master of ceremonies, diploma clerk, and robing captain. Kewin is also the recipient of the Alumni Distinguished Student Award, which is presented to a student who has led by example and has shown outstanding dedication to the student body.

Jessica Lee, a Nebraska native, is a graduate of Michigan State University. She served WMU-Cooley in several capacities, including: president of the Asian Pacific American Law Students Association, president and secretary of the Environmental Law Society, member and copy editor of The Pillar, and as an Enrollment and Student Services call center representative.

Okereke, a New Jersey native, is a graduate of Rutgers University-University College Camden. She received several awards, including the Robert E. Krinock Memorial Award, which is given to an individual who proved loyalty to the SBA and the student body through dependable involvement and a positive attitude; and the Student Bar  Association’s Distinguished Student Award, which goes to an individual who dedicated their time at Cooley serving the student body through continuous dedication to the SBA. While at WMU-Cooley, Okereke served on the Student Bar Association in several capacities, and also served as editor-in-chief at The Pillar, vice president and member of Phi Delta Phi, member of Black Law Students Association, Sports and Entertainment Law Society, Delta Theta Phi Law Fraternity, mock trial, volunteer at Cooley for Kids, graduation marshal and associate editor of Law Review.

Williams, originally from Ohio, is a graduate of Cleveland State University. He served WMU-Cooley in several capacities, including parliamentarian and community service of the American Bar Association Law Student Division, senator and historian board member on the Student Bar Association, member of Black Law Students Association, Phi Delta Phi, Law Review and mock trial, vice dean and general member of Delta Theta Phi Law Fraternity, sports editor and member of The Pillar, volunteer for Cooley for Kids and graduation marshal.