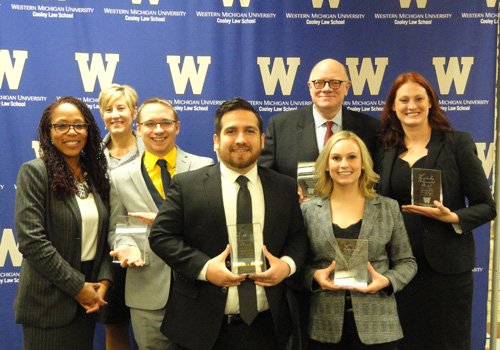 The convocation began with remarks from guest speaker James Sterken, an attorney who specializes in civil litigation, personal injury, employment law and estate planning law.  He explained to the students that as attorneys "we stand on the shoulders of other attorneys, and we rely on each other,” and encouraged them to remember why they wanted to be an attorney, and remember that it is a privilege to do the work.

“Being a good lawyer is being a good friend,” Sterken said during the convocation. “This means that sometimes you give hard advice telling them they don't have a case, and other times telling them this is a fight to take. "

Blease, from Grand Haven, Michigan, graduated with a Bachelor of Arts degree from Cornerstone University. While at WMU-Cooley, he has been a mentor with the Mentorship Committee; a teaching and research assistant with Evidence and Personal and Professional Responsibility; and a member of the Christian Legal Society. Blease has also served as secretary and a member of Mock Trial.

Brown, from Dearborn, Michigan, graduated with a Bachelor of Science degree from Grand Valley State University. He has served as senator, mentorship board member and president of the Student Bar Association. He has also served as student development and administration chair of the Mock Trial Executive Board during his years at WMU-Cooley. Brown also has been a competition winner at the Moot Court Intra-School Competition, and a teaching assistant for Constitutional Law. He has also served on Law Review.

Originally from Kalamazoo, Michigan, Geschwendt earned a Bachelor of Arts degree from Grand Valley State University. While at WMU-Cooley, she has served as editor-in-chief of Homeland and National Security Law Review; president, executive board member, and national team member of Moot Court; senator and mentor of the Student Bar Association; and member of the Business Law Society. Additionally, she has served as a student ambassador; a teaching assistant for Wills, Estates, and Trusts and Constitutional Law II, and a research assistant. Geschwendt has also volunteered at Mock Trial events.

Gorbutt, from Flint, Michigan, received a Bachelor of Business Administration degree from Grand Valley State University. During her years at WMU-Cooley, she has served as interim subcite editor of Law Review; secretary of Business Law Society; and member of Business, Entrepreneurial, and Tax Law Association. She has also served as a teaching and research assistant for Personal and Professional Responsibility.

Originally from Hoboken, New Jersey, Osinachi Onukogu received a Bachelor of Arts degree from Rutgers University. She has been a sub-regional director, president, event coordinator, and general member of the Black Law Students Association while at WMU-Cooley. In addition, she has served as secretary of the African Law Students Association; and treasurer of Phi Delta Phi. Onukogu has also participated in Moot Court Intra-School Competition.

Perez, from Grand Rapids, Michigan, graduated with a Bachelor of Science degree from Grand Valley State University. He has served as vice president, skills series co-chair, mentorship board member, and mentor of the Student Bar Association during his years at WMU-Cooley. Perez has also been a Mock Trial volunteer and competition participant, and a teaching assistant.

Taucher, from Detroit, Michigan, received a Bachelor of Science degree from Grand Valley State University. While at WMU-Cooley Law School, she has served as senator, secretary, mentorship board member, and mentor of the Student Bar Association; and a member of Phi Delta Phi and the Organization of Women Lawyers. In addition, Taucher has been a student ambassador, and has competed in the Mock Trial Intra-School Competition and Moot Court Intra-School Competition.

Originally from Grand Rapids, Michigan, VandenBerg graduated with a Bachelor of Science degree from Ferris State University. While at WMU-Cooley, she has served Mock Trial in various capacities, including: president, board vice chairperson, national team member, competition chair, competition problem drafter, competition winner, and general member. VandenBerg has also been a mentor with the Mentorship Committee, member of the Organization of Women Lawyers, and teaching assistant for Criminal Law.