WMU-Cooley Law School Professor Lauren Rousseau was one of the featured presenters during the March 26 symposium “Breaking the Cycle: Solutions to End the Opioid Crisis.” The symposium, held at WMU-Cooley’s Auburn Hills campus, included a keynote speech by attorney and former judge Jodi Debbrecht Switalski, who speaks nationally about the opioid crisis. 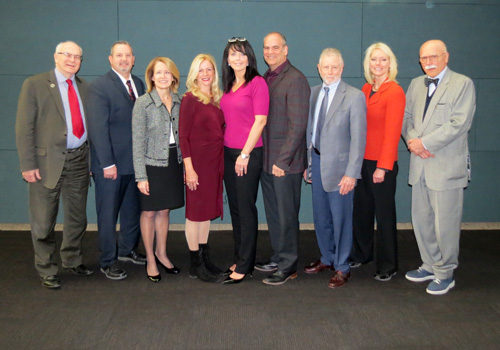 During her presentation, Rousseau spoke abut the role of families and community in solving the addiction crisis, and the need for better oversight of insurer compliance with parity laws, which require health insurance coverage for those suffering from addiction.

“Federal parity laws require most insurance plans to cover chronic mental health conditions such as addiction to the same extent that they provide coverage for other chronic disease like diabetes or cancer” said Rousseau. “We know there’s a lot of noncompliance with these laws.” Rousseau also discussed the need for addiction treatment in jails, as well as the need for state regulation of recovery housing.

“Recovery residences are homes for people in early recovery from addiction that provide structure, accountability, and recovery focus,” Rousseau said. “They are an essential part of the treatment continuum, but are virtually unregulated by the state, which creates a situation ripe for abuse.” Rousseau emphasized that the state should require recovery homes to be licensed or certified in order to ensure minimum quality and ethical standards.

Rousseau has spoken and written extensively about addiction and the opioid epidemic, and was honored as one of Michigan Lawyers Weekly’s Women in the Law in 2016, recognizing her work in addiction treatment, education, and advocacy. Rousseau, president of the Northwest Wayne Chapter of Families Against Narcotics, is also a founder of Unite to Face Addiction-Michigan, a community group dedicated to increasing awareness of addiction as a mental health issue, eliminating stigma, and advocating for change.

During the keynote, Switalski, a former judge and metro-Detroit felony prosecutor, spoke about the drivers of our current opioid epidemic and strategies for change. She emphasized the importance of education in the schools, noting that 90 percent of people struggling with addiction started using drugs before the age of 18. She also discussed the importance of breaking down silos in the treatment community in order to facilitate more effective solutions, and the need to eliminate stigma so that people who are struggling don’t feel ashamed to reach out for help.

The symposium was produced by Switalski and the Oakland County Bar Association Medical-Legal Committee.