WMU-Cooley Law School presented 32 juris doctor and nine master of laws degrees to graduates during the law school’s commencement ceremony for the Michigan campuses (Grand Rapids, Lansing and Auburn Hills) at the Wharton Center for the Performing Arts on Sunday, September 29. 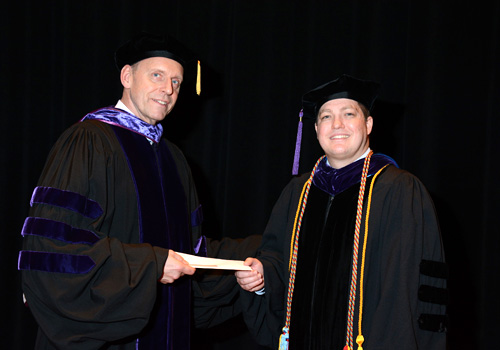 During the ceremony, Laila Malki, who was chosen by her classmates, presented the valedictory remarks, while the Hon. Cynthia M. Ward, 54-A District Court Judge in Lansing, provided the keynote.

As she spoke to her peers, Malki reminded them to reflect on the obstacles they had already overcome as they face off with the bar exam.

"Focus on the present and laying a foundation for a better tomorrow,” she told the graduates. “We aren't entitled to these things, we earn them. Someone very close to me said that everything doesn't always go as planned. In fact, nobody will hand you anything. You have to demand it. More than that, you have to take it, whenever you can, stand your ground where your feet are planted. Don't let anything take you out of your square and stay the course until your legacy is set in stone.”

During the keynote, Ward reflected on her 12 years working at WMU-Cooley, noting she was happy to return to her family. Although the students’ law school journey was coming to an end, Ward emphasized that commencement is just the beginning of a larger purpose in life.

Each class at WMU-Cooley bears the name of a distinguished member of the legal profession. This graduating class is named in honor of United States Supreme Court Justice Samuel Miller. Miller was a strong opponent of slavery, and was a devoted supporter of President Abraham Lincoln who also shared the same views on slavery. In 1862, President Lincoln appointed Miller to the U.S. Supreme Court. During the Civil War, Miller upheld the war-time suspension of habeas corpus and trials by military commissions. His tenure on the court lasted 28 years.