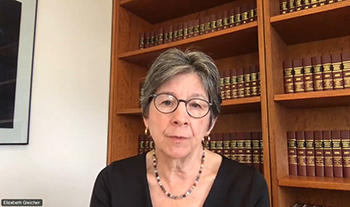 Gleicher and Myers reviewed the Supreme Court of the United States’ decision in Dobbs v. Jackson Women’s Health Organization, which overruled the 1973 landmark decision of Roe v. Wade and the 1977 Carey v. Population Services International and returned the authority to regulate abortion to individual states.

“Across the states we are seeing a lot of activity,” Myers said regarding abortion laws in various states around the United States. “There are currently 16 states that abortion is banned, or mostly banned, and in five states the courts are currently blocking those bans. Twenty states now have abortion rights that are legal and likely to be protected; and nine states, like Michigan and Florida, where it is essentially legal for now.”

Judge Gleicher said the U.S. Supreme Court is in a retrenchment mode and it has become increasingly important to understand how state constitutions play a role in both civil liberties and civil rights.

“I’ve seen a lot of change in our country and in the Supreme Court,” said Gleicher, who was appointed to the Michigan Court of Appeals in 2007 and served as an attorney in private practice for 27 years. “There is currently a mode in which every civil right and civil liberty that those of us who grew up in the 1960s and 1970s took for granted and seem to be now on the table.

“My take away from this political moment is that it is time for state courts and state constitutions to come to the forefront in terms of protections of civil liberties and civil rights.”

Myers, whose research focuses on judicial politics, intergovernmental relations, and political behavior, said that since Michigan and Florida are part of the “legal for now states,” it’s important to understand the populations involved and especially the number of women whose rights are directly impacted through these decisions and what the state governments are going to be doing.

“In Florida, the big activity surrounds House Bill 5, which was passed in April and put forward a 15-week ban,” said Myers. “But notably the ban did not include any exceptions for rape and incest. This bill is currently in litigation with the Florida Supreme Court.

Gleicher recited the closing statement by Justice Alito in the Dobbs’ opinion, which states, “Abortion presents a profound moral question. The Constitution does not prohibit the citizens of each state from regulating or prohibiting abortion. Roe and Casey arrogated that authority. We now overrule those decisions and return the authority to the people and their elected representatives.”

“I’m not sure Justice Alito fully anticipated what returning the authority to the people and their elected representatives meant,” said Gleicher. “The people here in the state of Michigan will vote on an amendment to our constitution. It will likely pass given the polling that’s out right now. And that will legalize abortion and shrine the right to abortion in our state constitution.”

The full presentation can be viewed at WMU-Cooley’s YouTube Channel.