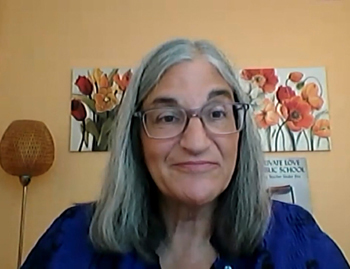 During the conversation, Yared discussed the history and societal relevance of a handful of the 200-300 laws that she cites as anti-LGBTQIA+. Some laws reviewed included gender confirmation treatments and procedures and how they relate to child abuse, transgender athletes and requirements to compete in activities as defined at birth, and gender markers on birth certificates and driver’s licenses.

“There's a younger generation that sees things differently,  that sees and understands a spectrum for gender identity, a spectrum for sexuality, and they have a comfort with it,” said Yared.

Yared reviewed root causes of social problems within the current environment. Notable root causes she discussed are demographics,  the fear of change, science, and law and policy in relation to religion and sex.

Yared has been practicing law for over three decades. As an attorney, writer, speaker, educator, and activist, she is an advocate for lesbian, gay, bisexual, and transgender people, and has fought against discrimination based on LGBTQIA+ identity, gender, race, religion, ethnicity, and against sexual harassment.

While speaking directly to law students, Yared said, “You can use social media in such a positive way and I encourage you to do so. I encourage you to place yourself as an educator, people will, and already have, looked up to you because of your work in the law, and so become that person. As a law student, we're about persuasion and, you know that you're going to persuade.”

The full presentation can be viewed on WMU-Cooley’s YouTube channel.