Western Michigan University Cooley Law School’s Board of Directors elected Hon. Louise Alderson of the 54-A District Court to serve a four-year term as its chair. Alderson served as vice chair since 2012 and replaces Lawrence P. Nolan, president of Nolan Thomsen & Villas, who did not seek reelection. Nolan served as the board’s leader since 2012. Scott A. Dienes, Of Counsel at Barnes & Thornburg LLP, was elected vice chair.

Alderson was elected to WMU-Cooley’s Board of Directors in 2005. Before being appointed to the bench in 2001, she was an assistant prosecuting attorney for Clinton County, served in the Michigan House of Representatives and Senate as legal counsel to the judiciary committee, and was legislative director for the executive office. In 2014, the Michigan Supreme Court appointed Alderson as chief judge for the 54-A District Court. 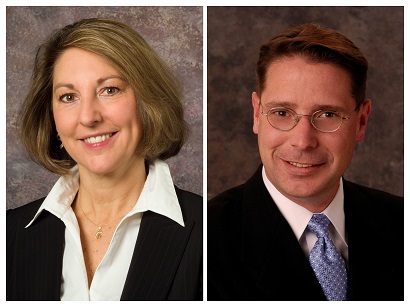 In addition to serving as chief judge, Alderson presides over the court’s specialized felony sobriety court. She is a member of multiple community boards in the mid-Michigan region, including EVE Inc., an organization dedicated to helping those affected by domestic and sexual violence; Girl Scouts of Michigan Capital Council; the Zonta Club of Lansing, a service organization advocating for women; the Michigan District Judges Association; and the Michigan Judicial Counsel.

“I am grateful for the confidence the Board has placed in me to serve as Chair of the WMU-Cooley Board of Directors at this defining and transformative time,” said Alderson. “WMU-Cooley’s mission and priorities remain steadfastly focused on preparing students of law to serve the evolving needs of society. I am committed to working with our Board and our new President and Dean to ensure the law school’s governance structure serves to propel the success of WMU-Cooley, our students, faculty and staff in this new chapter. I join my fellow board members in thanking Larry Nolan for his steady hand during his tenure as Chair and most notable for leading our Board during the recent presidential search that culminated in the selection of James McGrath as WMU-Cooley’s new President and Dean.”

Dienes has been a member of WMU-Cooley’s board since 2009. At Barnes & Thornburg, he is counsel to municipalities, downtown development authorities, police and fire departments, and school districts. He serves both governmental units and private developers on complex development and litigation issues. In addition to serving on WMU-Cooley’s Board, Dienes serves on the board of the Lake Michigan College Foundation and is a former member of the Siena Heights Board of Trustees.

"Congratulations to Judge Alderson and Scott Dienes, whose incredible support of our school was recognized with their election as board leaders,” said President and Dean James McGrath. "Both our new Chair and Vice Chair are proud WMU-Cooley alums, dedicated to the success of our proud institution. I look forward to working with them to ensure WMU-Cooley is not just reacting to the constant change in the legal profession, but leading in providing equitable access to legal education."