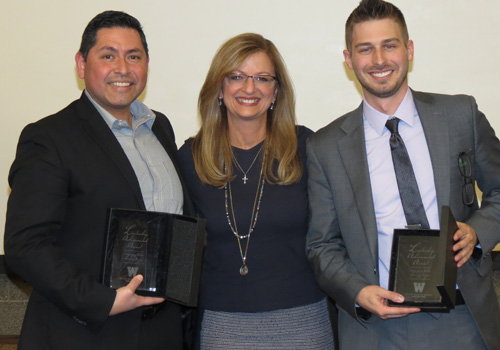 During the convocation, Arturo Alfaro was presented with the Alumni Distinguished Student Award. The award honors those students who have distinguished themselves throughout their law school career in the categories of academic success, high moral character and professionalism, participation and leadership in student organizations, and service to their community. The award is presented to graduating seniors who are nominated by the law school’s faculty, or by their peers. Winners are selected by members of the Western Michigan University Cooley Law School Alumni Association Executive Committee.  Alfaro was also presented with a Leadership Achievement Award.

Originally from Mexico City, Mexico, Alfaro received his Bachelor of Science degree from Baker College of Auburn Hills. During his years at WMU-Cooley, he has served as treasurer of the Student Bar Association Executive Board; editor-in-chief of Law Review; Moot Court president and vice president; Christian Legal Society president, treasurer, and secretary; and was a member of the Society for Personal and Professional Integrity. He also completed the law school’s Leaders Academy.

Guy Cotter was the second recipient of the WMU-Cooley Leadership Achievement Award. Originally from East Tawas, Michigan, Cotter received a Bachelor of Arts degree from Hope College. During his years at WMU-Cooley, Cotter has served as sergeant at arms of the Federalist Society; vice president and senator of the Student Bar Association; vice president of the Christian Legal Society; 1L hand house of the House Council; and chair of Mock Trial.