Charyn Hain, partner at Varnum Attorneys at Law; Donald Lawless, partner at Barnes & Thornburg LLC; and Karen Truszkowski, principal at Temperance Legal Group PLLC, were featured panelists during Western Michigan University Cooley Law Review’s annual symposium. The March 29, 2019 symposium, “The Changing Face of Title IX: An Eye on Gender Discrimination,” focused on proposed changes to Title IX of the Education Amendment Act of 1972, a federal law that states, “No person in the United States shall, on the basis of sex, be excluded from participation in, be denied the benefits of, or be subjected to discrimination under any education program or activity receiving Federal financial assistance.” 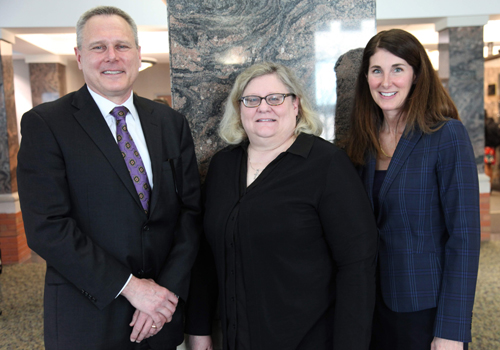 During the discussion, panelists reviewed proposed changes to Title IX and the potential impact on students. Those changes being reviewed in Congress include offering due process hearings for those accused of sexual assault and relaxing current rules regarding activities not held on school grounds.

Hain, who is a member of Varnum’s Litigation and Trial Services Practice Team, said the primary take-away from these changes is [President Donald Trump and his administration's] desire to level the playing field and provide more opportunities for respondents to present their case, access evidence, and witnesses.

"A big change, in my opinion which I think is good, is that schools may facilitate informal resolution as long as the process is voluntary,” said Hain. “Under the prior guidance you were not allowed to do a voluntary mediation in a sexual assault case no matter what. Even if both parties wanted it. Now you can."

While discussing sexual assault on college campuses and processes for handling allegations, Lawless, who has represented colleges and universities for over 30 years in student and employee matters under Title IX, said, “I don't see this becoming less legalized. But at the same time, we've got to run institutions of higher education. We're not courts of law on campus. Think of how many years we have invested in trying to figure out how to handle the procedure for adjudicating sexual assault on college campuses. And you know what? It's still the Wild West."

Speaking about how students are entitled to be advised of their rights if something happens to them, Truszkowski said, “At a minimum, students have the right to know who they need to go and talk to.”

Truszkowski also expressed concerns about the proposed relaxation of rules regarding off-campus activities.

"The change about schools not being responsible for things that happen off campus or outside of a school activity would take away 75 percent of my students’ claims.  And that doesn't mean that they've been any less injured, that they hurt any less. It doesn't mean it isn't affecting their ability to get an education and that's the bottom line."