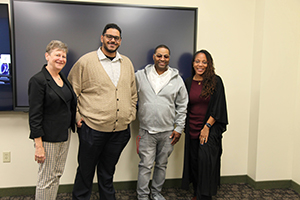 “The fight continues and they (exonerees) are very much in the throes of it. Exonerees and their allies from all around the country work every day to make sure that the people who are still incarcerated and are still suffering are able to get relief as well,” said Brame.

While talking about the need to hold prosecutors accountable for wrongful convictions, Mitchell-Cichon said, “We know nationally that very few prosecutors have been held civilly liable for their actions. They have not been held directly accountable as the lawyer in the case. There have been a handful of prosecutors that who have been disciplined and who have lost their law licenses.”

Hamilton spoke about the harm that prison causes individuals and shared some of his experiences. He explained why the prison system needs a major overhaul.

“The prison system we have today should be abolished. We have a system that we know is an oppressive system, a totalitarian system, an authoritarian system. We understand the chief concern of a prison is to control people and to micromanage a person’s life down to seconds, down to minutes,” said Hamilton. “Understanding that I don’t know the ultimate solution, but I do know that a harm is being caused and we are allowing a harm to be caused because we do not have solutions. This seems to only happen to prisoners, or to those we don’t like in our society.”

Mitchell-Cichon noted that, as a young defense attorney, she went into prosecutors’ offices where charts kept track of wins and losses. She said it was shocking to her because she thought she went into an environment that was about achieving justice. She said it shouldn’t be about wins and losses, but rather are the defendants’ constitutional rights being protected and are we getting to the right results. Mitchell-Cichon asked Nixon to share what he would say to aspiring attorneys who can make a cultural change in the criminal justice system.