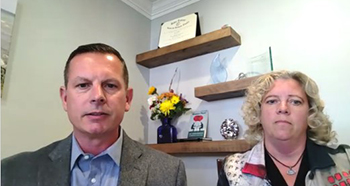 During his remarks, Daniels, a Purple Heart recipient, spoke about what Veterans Day meant to him and the importance of changing the discussion about veterans’ mental health.

“There’s something about the trauma of war,” said Daniels. “With my generation of veterans, we try and talk to each other a little bit more about it. PTSD can be handled better with open and honest communication with the understanding that showing emotion doesn’t make you any less of a man.”

The second event, held on Monday, Nov. 14, was a special Community Conversation honoring veterans. "Mission Next: Service Members to Civilians" featured Dr. John Wojcik and Kimberlie England, authors of the book Mission Next: Successfully Transitioning From the Military to the Civilian Workforce, and was moderated by WMU-Cooley Professor and retired Brigadier General Michael C.H. McDaniel.

Wojcik, a retired Army colonel, shared how transitioning service members can rediscover who they are and how to operate when entering into a new civilian work environment after they have served several years in the U.S. Armed Forces. He also shared the struggles employers face when hiring veterans.

“Leaders in the HR space repeatedly tell us that they are looking for military personnel and they want to hire them,” said Wojcik. “A disconnect happens when civilian organizations are unable to completely understand veterans’ experiences to properly use and extract all of the skills that those military leaders actually have.”

England explained the importance of employers being able to identify transitional challenges that veterans may experience. “If a match is made between a veteran’s personal values to that of the organization there will be a better fit and the veterans will last longer in these positions,” she said.