Graduates of WMU-Cooley Law School’s Tampa Bay campus were honored during a graduation ceremony on December 15th at the University of South Florida Oval Theater.

During her remarks, Mitchell pointed out that her Cooley classmates came from differing backgrounds, but all had common traits of bravery, resilience and compassion.

“Now, we get to change the world together,” Mitchell told her classmates and supporting family and friends. “We’ll be problem-solvers, negotiators, activists, peace-makers, fighters and advocates, and through it all, I hope we’ll stay compassionate.”

Gonzalez praised Cooley Law School for its flexibility and diversity that “allows people from every walk of life to attend law school.” He thanked professors and staff for making the school a welcoming place and for adjusting during the pandemic to still deliver a quality education. He ended by rallying his classmates.

“There’s nothing we can’t handle. Let’s go out there and show the world what a Cooley grad is made of,” said Gonzalez.

Ameen, partner at the Law offices of Ameen & Shafii,  inspired graduates by sharing a story of one of his clients who had been arrested for a third DUI. His work with the client and his knowledge of the law got the client off from the charge, but it did more than that. It changed the client’s life and he stopped drinking.

“You’ll be helping people at the worst time of their life,” said Ameen. “You’ll not only be their attorney, but also their counselor, their AA coach, psychiatrist, their friend. We learned all this at Cooley.”

He reminded graduates that they are creating a legacy for their families by attending and graduating from WMU-Cooley Law School. He pointed out that students come from many different backgrounds and some are inspired to go to law school because they were assisted by a lawyer at some point in their lives.

“Cooley grads don’t just work for big law. We don’t just work for big corporations. We also represent individuals. We are for the people. We defend their constitutional rights when they are arrested. We fight against the government when they’re coming to take children away from families in family court. When they’re separating families at the border. That’s what we do. We fight for the individual.”

In a special tribute for the late Hon. Thomas E. Brennan, Sr., his daughter, Marybeth Hicks, spoke during the Florida Commencement in his honor. She talked about the tradition and the importance of this particular class being named for her father.

"It is poignant for us, Tom Brennan's family, that his class is graduating in the school's 50th year and so we want to say congratulations to the Brennan Class and thank you for representing him so well."

Brennan was elected Associate Justice to the Michigan Supreme Court in 1966.  He served as Chief Justice in 1969 and 1970, the youngest justice to serve in that capacity. While serving on the bench, Brennan received numerous requests for law school recommendations, which inspired his vision for a non-profit law school in Lansing, Michigan. He incorporated Thomas M. Cooley Law School in 1972 with the belief that “an educated citizenry that understands the law is critical to the strength and progress of the nation.:

At the age of 15 Brewer entered Wesleyan College and later transferred to Yale. He graduated from Albany Law School and after graduation in 1858, he was admitted to the New York bar, but in lieu of practicing law, the California Gold Rush lured him westward where he prospected for gold on Pikes’ Peak before moving to Kansas. In 1864, he was elected as judge on the first judicial district court of Kansas and in 1870 was elected to the Kansas Supreme Court. President Chester A. Author appointed Brewer as associate Justice of the Supreme Court in 1889.  Brewer is remembered most for his opinions in re debs (1895) and Mueller v Oregon (1908).  Debs involved the 1894 strike led by Eugen Debs against railroads that used Pullman railroad cars, in which Debs was jailed for violating an injunction against the strike, which the Supreme Court upheld. In Mueller v Oregon the court decided that the state could limit women’s working hours for health reasons.

Photo 1: Kimberly (Shana) Mitchell was chosen to give valedictory remarks.

Photo 2: Alberto (Tito) Gonzalez was chosen to give valedictory remarks. 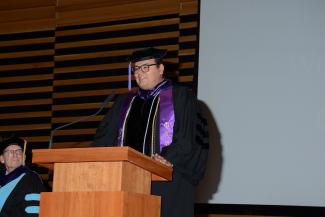 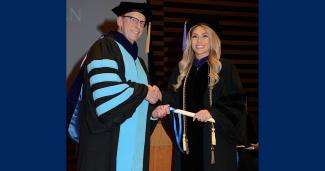