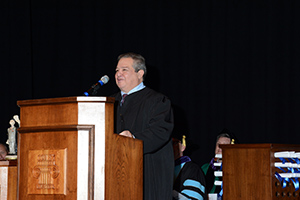 Pari thanked not only President and Dean James McGrath, professors and staff for sharing their “extensive knowledge and experiences” with the students, but also the class’s families and friends, in her address.

“You have supported us through the good, the bad, and the ugly. If anyone here has ever witnessed a law student crying over exam week, then you know it’s ugly,” said Pari, who also thanked her classmates for their perseverance during law school.

“Law school has also been tough, and we have had to be tough,” said Pari. “The pandemic made an already challenging journey, even more challenging. Yet we persevered, supported one another, and built friendships that will last a lifetime.”

White spoke about the future that he and his fellow graduates look forward to as lawyers.

“Was it worth it? Of course. It’s worth it from the perspective of our prospective clients who we have yet to meet,” said White. “They are but shadows in our minds. But, one day, those shadows will materialize and become real people with real cases with real problems.”

White reminded classmates that this will happen to them all someday. “We’re going to experience that. And when we do, we’ll see that we have been put into this position to help people who cannot help themselves.”

Flores shared about being privileged to be able and come back and teach at WMU-Cooley Law, after serving 14 years as an assistant prosecutor .

“It was a privilege to be both in the practice of law and being in the academic world,” said Flores. “This school does it as well as any other school in the nation.”

Flores had many pieces of advice for graduates as they enter the world of the legal profession. The most important things are to help people because “good lawyers make the world a better place.” Graduates should seek out what their passion in the world of law is and in doing so, will find their place in helping people.

“Stay humble and modest … treat everyone with respect. We should see the best in people, not the worst.” 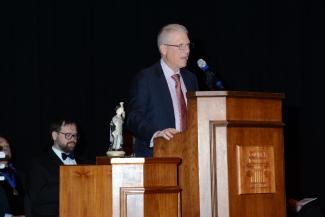 "I want to congratulate you for representing the school as part of the 50th celebration of the founding of our esteemed establishment," said Brennan. "I remember when dad decided to name every graduating class after Supreme Court justices starting with Cooley and now he is honored in this way. I want you to know it's wonderful."

Brennan was elected Associate Justice to the Michigan Supreme Court in 1966.  He served as Chief Justice in 1969 and 1970, the youngest justice to serve in that capacity. While serving on the bench, Brennan received numerous requests for law school recommendations, which inspired his vision for a non-profit law school in Lansing, Michigan. He incorporated the Thomas M. Cooley Law School in 1972 with the belief that “an educated citizenry that understands the law is critical to the strength and progress of the nation.

At the age of 15 Brewer entered Wesleyan College and later transferred to Yale. He graduated from Albany Law School and after graduation in 1858, he was admitted to the New York bar, but in lieu of practicing law, the California Gold Rush lured him westward where he prospected for gold on Pikes’ Peak before moving to Kansas. In 1864, he was elected as judge on the first judicial district court of Kansas and in 1870 was elected to the Kansas Supreme Court. President Chester A. Author appointed Brewer as associate Justice of the Supreme Court in 1889.  Brewer is remembered most for his opinions in re debs (1895) and Mueller v Oregon (1908).  Debs involved the 1894 strike led by Eugen Debs against railroads that used Pullman railroad cars, in which Debs was jailed for violating an injunction against the strike, which the Supreme Court upheld. In Mueller v Oregon the court decided that the state could limit women’s working hours for health reasons.