Graduates of WMU-Cooley Law School’s Tampa Bay campus were honored during a graduation ceremony on May 14 at the University of South Florida Oval Theater. 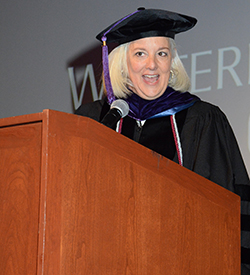 During her remarks, Smithman shared the story of Diana Nyad who successfully swam 110 miles from Cuba to Key West after four failed attempts.

“On that jubilant day, Ms. Nyad shared three personal messages with the cheering crowd,” Smithman said. “Those three messages were, ‘Never, ever give up; you’re never too old to chase  your dreams;  and It looks like a solitary sport, but it’s a team.’”

While comparing graduation to Nyad’s day,  Smithman said that she thought about giving up during her first term of law school.

“I ask you now, without 1L fear, look to your left and to your right. Say congratulations and thank you - because together, none of us ever gave up,” said Smithman. “We all came to law school at exactly the right time. The Samuel Blatchford Class is graduating students ranging in age from 23 to 62. Wherever you are on that spectrum, you chose to chase this dream at this juncture of your life.”

During Armstrong’s keynote address, she spoke about the challenges she faced growing up in a single-parent home and how her childhood helped her better understand the children that Crossroads for Florida Kids, Inc. represents.

“I had a lot of responsibility growing up, and through it learned that hard work and positive attitude could lead to success,” said Armstrong. “I owe my desire to be a lawyer and passion for pro bono legal services to my mother, who instilled a spirit of helping others in me even when I was a child.  Now, I have the legal skills to use to bring justice to the lives of poor people.”

Each class at WMU-Cooley bears the name of a distinguished member of the legal profession. This graduating class is named after U.S. Supreme Court Justice Samuel Blatchford. Blatchford was first introduced to the law through his father, who was legal counsel for the Bank of England and the Bank of the United States. He practiced international law and turned down a seat on the New York Supreme Court in 1855. During the 1850s he reported extensively on federal court decisions from New York’s Second Circuit Court in what was known as Blatchford’s Circuit Court Reports. In 1867, he was appointed as a federal judge for the southern district of New York. President Chester Arthur appointed Blatchford to the Supreme Court in 1882. During his time on the Supreme Court, he wrote 435 decisions, most in areas relating to commerce and patents.