Michigan campus graduates of WMU-Cooley Law School were honored during a graduation ceremony on May 12 at the Michigan State University Auditorium. 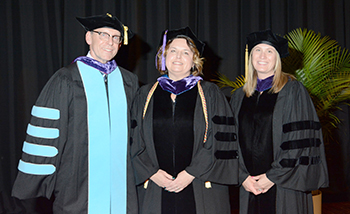 During her remarks, Walksnice spoke about the time graduates spent looking forward to graduation.

“Graduation May 2022. For all of us here, this date has been emblazoned on our calendars for at least three years! From the first day of orientation, I am sure more than a few of us were sitting at those circular tables in the lobby listening to the endless presentations,” said Walksnice.

Walksnice shared the changes that have occurred during the graduates’ three years of law school and how that may help while practicing law.

“When we began our law school journey, we could not have predicted the magnitude of changes that have occurred in these past three years, changes addressing civil rights, voting rights, and reproductive rights, among many others facing the world today,” said Walksnice. “So, whether your path leads you to small town America, to big city law firms, to universities, or even to a federal bench, I challenge all of us to make a difference in this world with the gift we have been given.”

While speaking about her time in law school, Schimke said, “I recall on my first day, walking into a massive hall and being welcomed by the then dean and being handed a free insulated Cooley travel mug. Little did I know how hard I was going to work for that mug.”

Schimke told graduates that following commencement there will be new challenges.

“Law school was a challenge. As lawyers, you are now held to a higher standard,” Schimke said. “You will be scrutinized and pressured. You are the ones carrying the torch for your generation. Advocate with purpose and grace and change the world, even if it is your client’s world – because you have the power.”

Each class at WMU-Cooley bears the name of a distinguished member of the legal profession. This graduating class is named after U.S. Supreme Court Justice Samuel Blatchford. Blatchford was first introduced to the law through his father, who was legal counsel for the Bank of England and the Bank of the United States. He practiced international law and turned down a seat on the New York Supreme Court in 1855. During the 1850s he reported extensively on federal court decisions from New York’s Second Circuit Court in what was known as Blatchford’s Circuit Court Reports. In 1867, he was appointed as a federal judge for the southern district of New York. President Chester Arthur appointed Blatchford to the Supreme Court in 1882. During his time on the Supreme Court, he wrote 435 decisions, most in areas relating to commerce and patents.