WMU-Cooley Law School honored 70 graduates of its Justice William Strong Class during a virtual commencement ceremony on Dec. 6. During the ceremony, 64 juris doctor and six master of laws degrees were conferred to graduates from the law school’s Michigan (Auburn Hills, Grand Rapids, and Lansing) and Tampa Bay, Florida campuses. Due to the COVID-19 pandemic, the commencement honoring those who earned degrees following the law school’s summer term was held virtually. 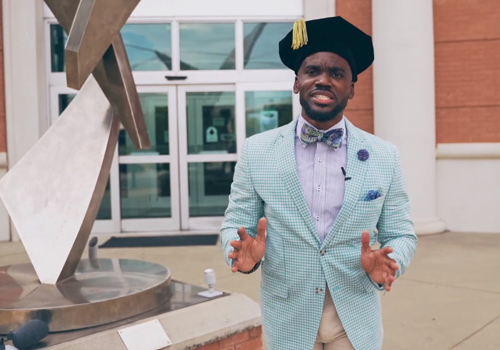 During her remarks, Morris thanked the WMU-Cooley faculty, adjunct professors, and the librarians who “instilled in us the knowledge and know-how to not only become successful attorneys but independent thinkers that can see both sides on almost any issue.”

“At the beginning of our law school tenure, we were all bright-eyed and eager to learn about the law,” said Morris. “Through this experience we found a group of like-minded individuals who are eager to do the same. Now, as we come out of this experience, we emerge as fully capable legal minds ready to take on whatever the world throws at us.”

While speaking to his classmates, Petty spoke about the importance of WMU-Cooley Law School being the most diverse law school in the nation.

Petty asked his fellow students the question, “why not us?” He noted that, “today we answer the question as attorneys, by saying it is us. We are the class that will remind America that democracy is still right. It is us, democracy was created by lawyers and will be fixed by lawyers. And lastly, it is us; I want you to know that lawyers make a difference.”

McGrath started the keynote address by saying, “I want to start out by saying how proud I am of our students, stepping up and making it all work when nothing in the world seems to be working right. I’m proud of our faculty and staff for shifting gears to keep everything working when we went 100 percent online in a moment’s notice.”

Speaking to the graduates, McGrath said, “Today as we celebrate your accomplishments and all the promise as your future as a lawyer, I want to remind you of all the possibilities awaiting you.”

Talking about career paths with a law degree, he said, “As we celebrate your accomplishments and all the promise of your future as a lawyer, I want to remind you of all the possibilities awaiting you. Your potential with a law degree is absolutely amazing, you can work in private practice, government practice, or you can work in compliance, business, business practice, you can be the head of an NGO or a corporation. A legal degree is great training for so many careers, and maybe even some new careers that you will create for yourselves based upon your unique set of skills.”