Michigan campus graduates of WMU-Cooley Law School were honored during a graduation ceremony on Dec. 18. The commencement, which was held live at Michigan State University’s Wharton Center, allowed family and friends the opportunity to join the ceremony remotely through a YouTube livestream event.

During her remarks, Davis, who earned her bachelor’s degree from the University of Michigan and a master’s degree in business administration from Keller Graduate School of Management, lauded WMU-Cooley’s faculty and staff for their genuine care for each of the graduates’ education and wellbeing, while helping them along their path to become lawyers.

“We come from all different experiences and all different backgrounds,” said Davis. “However, we shared one hope, one goal in common and that is to become a lawyer and make a difference in the world. As we leave here and go off into our respective fields in the legal arena, in whatever we do, know that you are enough and you’ve always been enough. As we go forward, remember graduates, that everything you have been through, you have already made it through. And everything that you are about to go through, you’ve got this! Don’t forget your greatness.”

During his keynote address, Bernstein, who is an avid marathon runner, shared his personal story about being struck by a speeding bicyclist while training in New York City’s Central Park. The accident left him with severe injuries that required hospital care for 10 weeks. After being released from the hospital, Bernstein, who was born blind, ran his 18th marathon.

“What allows for you to be a good lawyer, or a good judge, or a good servant, is your life experiences. The reason that I love this institution and the reason that you’re going to be leaders is because the experiences that God has given each and every one of you. It is only through struggle; It is only through hardship; It is only through difficulty that you can come to know, understand and appreciate the struggles and the hardships and the challenges that your friends, that your neighbors and that your colleagues have to endeavor and experience each and every day. You are going to be the kind of lawyer who understands what it means to serve. And I ask each and every one of you to celebrate every victory, every accomplishment, and every achievement that you have been a part of.”

Each class at WMU-Cooley bears the name of a distinguished member of the legal profession. This graduating class is named after U.S. Supreme Court Justice Horace Gray. In 1881, President Chester A. Arthur nominated Gray to the U.S. Supreme Court, where he served for 20 years. He is best remembered for his opinion in United States v. Wong Kim Ark, which held that persons born in the United States were U.S. citizens, notwithstanding the nationality of their parents, thereby limiting Congressional power to exclude them from the United States. 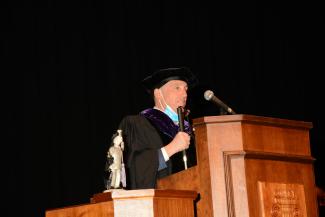 WMU-Cooley Law School graduate Katrina Davis was chosen by her peers to present the valedictory remarks during commencement ceremonies for the law school’s Michigan campuses. 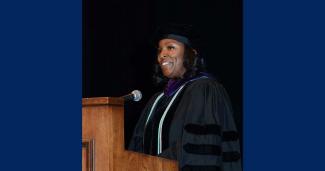