On Nov. 15, WMU-Cooley Law School honored graduates of the May 2020 class during a virtual commencement ceremony. Due to COVID-19 pandemic safety precautions, it was not possible to hold an in-person commencement in May. During the ceremony, 142 juris doctor and five master of laws degrees were conferred to graduates from the law school’s Michigan (Auburn Hills, Grand Rapids, and Lansing) and Tampa Bay, Florida campuses. 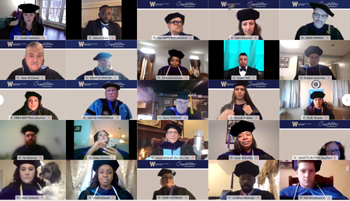 Providing the valedictory remarks were Jenell Gillespie, from the Tampa Bay campus, and Lauren Simasko, from the Auburn Hills campus. The keynote was presented by WMU-Cooley Professor Marla Mitchell-Cichon.

While speaking to the graduates’ family and friends in attendance, Gillespie said that, throughout law school, every student faces various struggles.

“In a matter of weeks our normal routine of going to class, talking to our professors, laughing and joking with our friends in the lounge and hitting those study sessions in the library were replaced by finishing classes online, social distancing from or peers and remaining in the safety of our homes as we quarantined,” said Gillespie.  “There is beauty in the struggle and we do not grow when things are easy. True growth comes when we face challenges and come out on the other side stronger.”

During her remarks, Simasko shared what it means to graduate from law school.

“I am overwhelmed with pride to be representing the Stephen Johns Field graduating class. Graduating from law school is an unbelievable triumph.  After 90 credits of putting our hairlines, waistlines, sanity, soul, and heart on the legal chopping block, we all deserve to take a moment and bask in the electricity of this triumph,” said Simasko.

While speaking directly to her fellow graduates, Simasko said, “You have proven our intelligence to the world. You are responsible, reliable, resourceful, analytical, but as a WMU-Cooley graduate you have even more. Knowledge of the law isn’t only power, it’s adventure. It’s the chance to create a just future for our global community.”

During the keynote address, Mitchell-Cichon, who has extensive practice experience in criminal and poverty law and is director of the WMU-Cooley Innocence Project, spoke about the importance of love for the vocation of law in order to experience joy while working in the legal profession.

“Love for a vocation, love for a profession, love for a calling. You now know I have been a lawyer for quite some time. And I have been recognized for my work. But love is not about that,” said Mitchell-Cichon. “When we love, truly love, we seek nothing in return. When we give love freely and unconditionally, we experience joy. That is what this profession has given me. And that is what I wish for you.”

Mitchell-Cichon also suggested four questions that each graduated should ask of themselves and return to throughout their careers.

“First, am I listening? It is critically important that those in a position of power — which you now are— listen. Second, choose your words carefully. We often remember for years touching words or stinging words that have been spoken to us. Words have the power to hurt. Third, am I doing this for the right reason? This goes beyond being an ethical lawyer. Finally, am I taking care of myself? It’s no secret that lawyers are susceptible to burnout. Be proactive and participate in healthy activities and learn more about how you can be affected by your work,” said Mitchell-Cichon.

Each class at WMU-Cooley bears the name of a distinguished member of the legal profession. This graduating class is named after U.S. Supreme Court Justice Stephen J. Field. Field was appointed to the Supreme Court by President Abraham Lincoln in 1863. He was previously elected to the California Supreme Court in 1857 and eventually became that Court’s chief justice. During much of his career with the U.S. Supreme Court, Field often found himself with the minority in many of the Court’s decisions. But by the 1890s, the majority of the Court had adopted much of his doctrine. Justice Field resigned from the Court on Dec. 1, 1897.