Graduates of WMU-Cooley Law School’s Tampa Bay campus were honored during a graduation ceremony on Dec. 19. The commencement, which was held live at the University of South Florida Music Hall Center, allowed the opportunity for family and friends to join the ceremony remotely through a YouTube livestream event.

During her remarks, Lewis, who earned her bachelor’s degree from Saint Leo College, spoke about overcoming the challenges the graduates faced while completing law school during a pandemic.

“The magnitude of what we accomplished should not be understated because regardless of what was thrown our way we met each challenge head on and we kept our eye on the goal, and we could not have done this alone,” she said. “The completion of this part of our journey is a testament not only to our own strengths, but the strengths of everyone around us. This entire community of individuals, family members, professors, and staff, who helped us arrive today. But there is only one group that will know what it’s like to graduate from law school during a pandemic, and that is this group right here. We learned from each other, we formed relationships that can never be broken, we cried together, we laughed together, we supported each other, and yes, we became family.”

Lewis explained how she and each of her fellow graduates weathered the storm of law school and came out the other side triumphant.

“Law school is an extraordinary experience, and we have many incredible memories. But remember, these experiences don’t define us. Only we can define who we are and who we will be in the future,” she said. “So, as you leave today, take a moment to reflect on who you are, who you’ve become, and how you want to define your future, and savor this momentous achievement.”

During his keynote address, Meade shared how giving back was monumental in discovering his life’s purpose and helped him turn his life around from drug addiction and nearly taking his own life.

“There’s nothing we can’t attain if we believe in ourselves enough and if we dedicate ourselves and our lives to giving back and making the world a better place,” said Meade. “As you move on in life and go beyond your next journey to the next stage in life; as you relish the accomplishments that you have just made and that you look forward to in the future; take that accomplishment and figure out ways to turn them into good, to make sure that others are able to benefit from that.”

Meade concluded his keynote address by giving the following advice to the graduates: “Find ways to connect with something that’s greater than you as an individual; Find your passion and your purpose and realize that if you talk about a passion or you talk about a purpose, it is something that you are committed to and not just contributing to; and finally, lead with love. My work was driven by love, and I challenge you to let your work be driven by love no matter what it is you do. If love is the driving force, lives will be impacted, and your time on this planet and the work you put in to get this degree will all be worthwhile.”

Each class at WMU-Cooley bears the name of a distinguished member of the legal profession. This graduating class is named after U.S. Supreme Court Justice Horace Gray. In 1881, President Chester A. Arthur nominated Gray to the U.S. Supreme Court, where he served for 20 years. He is best remembered for his opinion in United States v. Wong Kim Ark, which held that persons born in the United States were U.S. citizens, notwithstanding the nationality of their parents, thereby limiting Congressional power to exclude them from the United States. 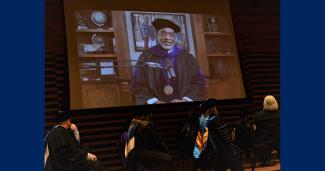 WMU-Cooley Law School graduate Kimberly Lewis was chosen by her peers to present the valedictory remarks during the commencement ceremony for the law school’s Tampa Bay campus.