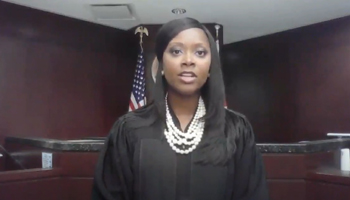 During her remarks, Murrell, who attended the Lansing campus, spoke about the class’ journey through law school.

“We all remember the first day of orientation when we were told that time would go by quickly and by the time we finally look up, we will be done. My fellow graduates look up. We are here now. We have finished the course.”

She spoke about changing from in-person to virtual classes due to the pandemic.

“Suddenly we could not come to campus, but we adapted.  It was a rough start for many of us, but we persevered,” Murrell.  “Our law school experience was like a seed that was planted. That seed was our law school application.  When we were accepted we were covered by mountains of coursework that some of us have never experienced before, kind of like being covered with top soil and fertilizer. We knew it was good for us, but it was also suffocating at times. The seedling was watered by our tears of first year law school exams. It was nourished by so many, our professors and staff who welcomed us openly, by our fellow classmates, and the sunny dispositions of our friends and family who championed us on and always gave us a positive uplifting word.”

Faulkner, from the Tampa Bay campus thanked friends and family of graduates by saying, “without you this marathon might not have been quite as bearable.”

While speaking directly to his classmates, Faulkner said, “The network of friends we have made at Cooley will be with us for life. We have shared an experience that most people wouldn’t attempt. We know there are great things in store for all of us. The law degree is one of the most versatile degrees in the world. You can use it for most anything you want. Law school has taught us to think of things in ways most people cannot. It has taught us to value integrity and good relationships. It has taught us to be comfortable with uncertainty. So go out there and accomplish whatever life brings you.”

As Costello addressed the graduates, she spoke about the importance of the accomplishments of graduating from law school.

“Today we are celebrating 207 juris doctor recipients. We are celebrating seven LL.M. recipients, those who thought law school was so nice they decided to do it twice. The Class of 2021 represents 124 different undergraduate institutions from around the country. There are members from this graduating class hailing from every branch of the armed forces.” said Costello.

Costello shared the importance of going through law school during the challenging times of the pandemic, the power of resilience.

She shared advice on being resilient, by first referencing the definition of resilient from Black’s Law Dictionary. “ ‘The ability for something to return to its original form after being compressed or stretched, or the ability to recover from or adjust to adversity and change.’ You can definitely say the uncertainty of this past year compressed and stretched us. Importantly, over this past year, we’ve had to function without one of the most important aspects of the human experience, each other. Unfortunately, after the year we have experienced, and unlike the first definition, we will never return to our original form after what we have been through. For that reason I think the second definition of resilience is much more helpful to describe our current state in light of the difficulties we face. We will and we have and shall recover from and adjust to adversity and change.”

Talking about her experience as a lawyer and now a judge she explained how her own resiliency got her to where she is today. Costello shared a time when delivering the closing arguments for a defendant as the youngest lawyer in the courtroom that she had to “rise for the occasion and be resilient.” Costello said, today as a judge, “It does me great joy to see great lawyers do the same in a multitude of ways, because of the extraordinary impact you can have as an advocate for others.”

Each class at WMU-Cooley bears the name of a distinguished member of the legal profession. This term’s class honors U.S. Supreme Court Justice William Burnham Woods. He passed the Ohio bar in 1847 where he became a prominent attorney and mayor. In 1857 he was elected to the state legislature. Although Woods apposed the Civil War and President Lincoln’s policy, he was convinced that victory over the south was necessary. He joined the Union Army in 1862. After the war, he moved to Alabama and in 1869 was appointed judge of the Fifth Circuit by President Grand. In 1880 he was appointed to the Supreme Court by President Hayes. Woods wrote 159 opinions before becoming incapacitated due to illness in 1886, and died a year later.