EAST LANSING, MICH. – Graduates of WMU-Cooley Law School’s Lansing campus were honored during graduation ceremonies on Sept. 26. The commencement, which was held at the
Wharton Center in East Lansing, included the opportunity for graduates from previous terms to participate due to cancellations of past in-person ceremonies because of COVID restrictions.

During the commencement, 49 juris doctor degrees were conferred to members of Michigan’s Stanley Matthews Class, and 30 past-term graduates from Michigan’s campuses participated in the ceremony.

During her remarks, Poole, who earned her bachelor’s degree from Prairie View A&M University, reflected upon their journey through law school and the many challenges the law students faced, especially during the COVID pandemic.

“We have all heard the saying that ‘law school is a marathon and not a sprint.’ Well, I am happy to announce that we have finished this marathon,” said Poole. “From the long nights updating outlines, reviewing notes, and briefing cases, to late nights studying for finals, that was all a part of the marathon and what got us to the finish line today.  Our time at Cooley has prepared us to face challenges head-on and be great advocates. We have earned our place in the legal field, and I am sure we will make an everlasting mark.

“Although COVID may have brought some tough times, I want us to focus on what we gained from this experience,” Poole added. “Going forward, we now know that nothing can stop us. We made it even when it felt like everything was against us. The next time you find yourself unsure what to do, or you feel your back is against the wall, remember that you made it during a world-wide shutdown. You picked up the pieces and continued to walk with your head up. That is what we should remember about this pandemic: That we are strong, and we can get through anything that is thrown our way.”

During his keynote address, Judge Rowe spoke with students about how he overcame adversity and pushed aside the naysayers when he decided he wanted to go to law school.

“As many of you are aware, I sat in the very seats that you are sitting in just six years ago,” he said. “Yes, that’s right, just six years ago I graduated law school, and here I am before you as a sitting judge. Not only just a sitting judge, but one of the youngest, if not the youngest appointed judges in Michigan history. When I wanted to become judge, I received a lot of feedback: Well, you’re too young, you should wait a few years, you need to do X and Y. If I had listened to my counselor or to the negative people, I would not be standing before you today.

“There are a few pointers that I have for your success as future attorneys,” Judge Rowe added. “I guarantee you, no matter what area of law you practice, whether it is litigation or transactional or you are a research attorney, these tips will help you be successful in your legal practice: Follow the golden rule, be true to yourself, don’t let others tell you that you can’t do something, reputation, reputation, reputation, and take care of yourself. Honestly, these steps are how and why I am before you today. Hold on to these steps, remember you are strong and can persevere through lows and highs. You control the direction of this great country.”

During the ceremony, WMU-Cooley Professor Erika Breitfeld was presented with the Stanley E. Beattie Award for excellence in teaching. Each term’s graduating class votes on the faculty member who will be honored with the award.

Each class at WMU-Cooley bears the name of a distinguished member of the legal profession. Stanley Matthews, an Ohio native and graduate of Kenyon College, moved to Tennessee, where he passed the bar and began his legal practice at the age of 18. In 1877, as part of a special commission to resolve the issue of contested electoral votes during the presidential election, Matthews was one of the principal spokesmen for Hayes, who eventually won the presidency against Democratic candidate Samuel J. Tilden. In 1881, President Hayes nominated Matthews to the Supreme Court to fill the vacancy created by the resignation of Justice Noah Swayne. 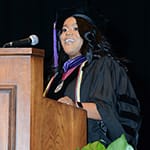 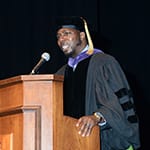 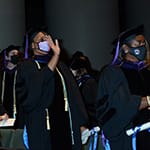 Graduates from WMU-Cooley Law School’s Michigan campus at the commencement ceremony on Sept. 26. 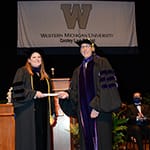 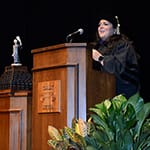 About WMU-Cooley Law School: Since the law school's founding in 1972, WMU-Cooley has provided more than 20,000 graduates with the practical skills necessary for a seamless transition from academia to the real world. WMU-Cooley is an independent non-profit law school committed to providing a practical legal education. The law school enrolls classes year-round at its Michigan and Florida campuses and is accredited by both the American Bar Association and the Higher Learning Commission of the North Central Association of Colleges and Schools.