No one can forget the images of devastation on the Gulf Coast left by Hurricane Katrina in August 2005. When it seemed that desperation and chaos were taking over the city of New Orleans, one man stepped in to take charge and restore order and hope – Lieutenant General Russel L. Honoré. On Jan. 21, 2021, Honoré was the featured speaker during WMU-Cooley Law School’s Equal Access to Justice Day’s virtual program, “The New Normal: Leadership and Preparedness in the 21st Century: Pandemic and Political Unrest.” 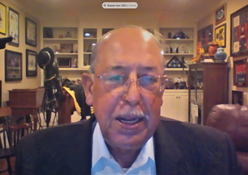 Honoré, who has been tapped by Speaker of the U.S. House of Representatives Nancy Pelosi to lead a review of the security infrastructure after the U.S. Capitol attack, shared leadership lessons as well as the benefits of developing a culture of preparedness. He discussed the essential qualities that 21st century leaders need: decision superiority, along with the ability to see first, understand first, and act first. Honoré said there are two sides to any disaster. He added that, waiting until disaster hits before you respond - is only dealing with the "right side." He advocated that leaders need to proactively deal with the "left side"-- before disaster strikes.

As to the job Honoré will take on in Washington, D.C., he said, “My job for Speaker Pelosi is to make sure the systems and infrastructure in place is such that our capitol does not get penetrated, like it did, by any group in the future. All the tools were there to protect the Capitol. They were not used.”

Honoré's war stories, from a life of service, and frank conversational style inspired those in attendance. Professor Mark Dotson said, “I want to join the military, this guy has got me fired up.  I want to be part of whatever he’s part of.”

In answer to a question about economic disparity and strategic change, Honoré said, “I think the number one thing we can do is to fully fund pre-K through 12th grade.”  He continued, “We need to get serious about every child getting to go to a good school … We can equalize every child in America, if we provide equal opportunity in education.”

WMU-Cooley President and Dean McGrath told Honoré, “I was very concerned about the future of our Capitol building, but after hearing you speak and hearing your plans, I feel very secure that our nations’ capitol will never again be desecrated like it was two weeks ago.”

Honoré concluded his remarks by saying, “We need you, need good lawyers, and we need to make that Constitution work, but we need to make that Constitution work for everybody. And, just because it’s law, doesn’t mean it is right. Which means you got to go change the law.  And, we have some laws that need to be changed. And that is the power of what you and your skills and knowledge and abilities have to do.  Which one of these are you going to be the Thurgood Marshall on - to try and create change?”

A native of Lakeland, Louisiana, Honoré was commissioned a second lieutenant of infantry and awarded a Bachelor of Science degree in Vocational Agriculture from Southern University and A&M College. He holds a Master of Arts in Human Resources from Troy State University as well as three honorary doctorate degrees.

Honoré led the Department of Defense response to Hurricanes Katrina and Rita along with serving in a variety of command and staff positions which focused on Defense Support to Civil Authorities and Homeland Defense. His work has supported the United States military response to flooding which swept Venezuela (1999) and Mozambique (2000).

Honoré retired on Feb. 29, 2008, following 37 years of active service with the United States Army. He continues to speak and consult nationally on building a culture of preparedness.

WMU-Cooley’s Equal Access to Justice Day, honors Dr. Martin Luther King by reflecting on the role of law and lawyers in protecting the right of everyone and assuring equal access to justice.