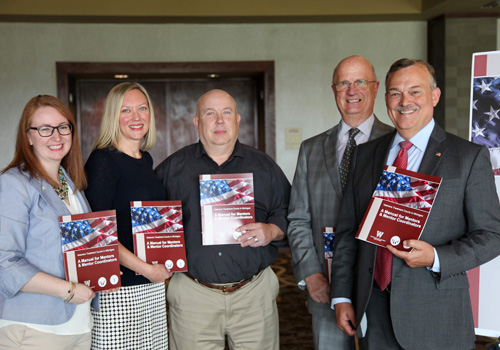 “Veterans Treatment Courts in Michigan: A Manual for Mentors and Mentor Coordinators” is a compilation of best practices used to address the needs of veterans  who are on a  journey to recovery from addiction, serious mental illness and/or co-occurring disorders after being confronted with non-violent criminal charges.

Karen McCloskey, health strategy analyst at the MVAA, said one unique aspect of the veterans treatment courts is the veteran mentors.

“These volunteers dedicate their time to help fellow veterans through a difficult period,” said McCloskey. “This manual is intended to help mentors understand their roles within the Veterans Treatment Court to further assist the veteran they are supporting,”

In 2013, the Michigan legislature created a broad set of standards that allowed local courts to establish VTCs as alternatives for veterans accused of certain crimes. Michigan is a national leader in the number of existing VTCs with 27 across the state.

“After attending many veterans treatment courts graduations across Michigan, I have seen living proof that these programs truly solve problems and save lives,” said Justice Elizabeth T. Clement, who is the Michigan Supreme Court (MSC) liaison to problem-solving courts. “But these successes couldn’t happen without a key element: the veterans who volunteer their time to be paired with vet court participants and help them successfully navigate their way back into civilian society. Their sacrifices for our country and contributions to our courts are deeply valued, and we owe it to them to give them the tools they need to succeed.”

"The success of veteran's treatment courts is due not just to the alternative sentencing and focused resources. In great part, it is due its unique resource - the use of fellow veterans as mentors,” said McDaniel. “A veteran that commits a non-violent crime in Michigan will be teamed with a mentor of similar rank, branch of service and, if possible, age. Having a mentor who has already walked the same walk as the veteran builds trust more quickly. The mentor, having shared similar military experience and knowing the same culture, can provide support and advice which is heard and heeded."

The Michigan Supreme Court provides advice and support to 242 trial courts statewide regarding the adoption of best practices to improve service to the public.  In particular, MSC analysts collect data regarding court performance (such as recidivism rates) and use the data to provide guidance on improving outcomes.

Clement added that special thanks also must be given to those who put the manual together: Tracie Lemon; Julie Lawler-Hoyle; John O’Neill; Natalie McPherson; and Jeremy Tatum and Desiree Benedict at Western Michigan University Cooley Law School, who, under the direction of Associate Dean Michael McDaniel, conducted the multiple interviews used to create this important resource to help Michigan’s veterans.