Attorney Warren Hope Dawson was presented the “2019 Distinguished Leadership Award” by Black Law Students Association (BLSA) at WMU-Cooley Law School’s Tampa Bay campus. The Black Tie Ball – “Mardi Gras Masquerade” was held at the University Club of Tampa on March 2. Dawson was presented this award for his many years of work in ensuring that all students in the School District of Hillsborough County (SDHC) have access to a high quality education. 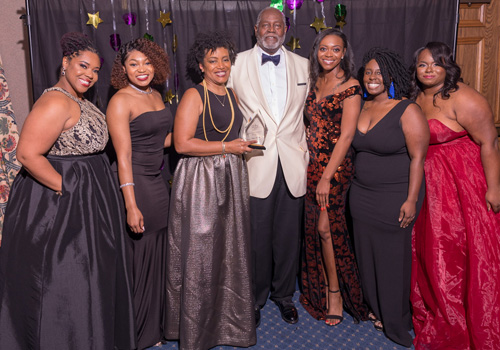 Dawson said it was important for attorneys to be involved in their communities and help those who are not being treated fairly. Directing his remarks to the law students, he said, “Don’t pursue a legal career for the money.  Do it to make your community better. The money will come if you have a commitment to improve the lives of people.”

Dawson is a native of Mulberry, Florida, a graduate of Union Academy High School in Bartow, the third black graduate of a public high school in Polk County, Florida to become a lawyer, and a graduate Florida A&M University in Tallahassee. He served as an active duty officer in the U.S. Army from 1961 to 1963. He received his law degree from Howard University in 1966.

In 1974, Dawson, a nationally recognized leader in the legal profession, became the lead counsel for the plaintiffs in the now famous lawsuit known as Manning vs. the School Board of Hillsborough County.  The plaintiff class consisted of "all minor Negro children and their parents residing in Hillsborough County." In that role, he was responsible for monitoring and enforcing the desegregation orders handed down by the federal courts. In April 2018, SDHC Superintendent Jeff Eakins dedicated The Warren Hope Dawson Elementary School, located in the Riverview community, in honor of Attorney Dawson’s four decades of diligence for students.

As a civil rights lawyer, Dawson worked for more than two decades without compensation as he continued the legal effort to eliminate the dual, black and white, school systems in the public schools of Hillsborough County, Florida. In 2001, a federal appeals court finally ruled that the school district had achieved "unitary status" and no longer required federal judicial supervision.

Dawson has received numerous awards for his many years of distinguished service as an attorney. In 1967, Dawson became the city's first black assistant city attorney for the city of Tampa. In 1983, his leadership among lawyers was recognized by his election as president of the National Bar Association. In that same year, Ebony Magazine recognized Dawson as one of the “100 Most Influential Black Americans”. Dawson continues to practice law in Tampa, and recently celebrated his 50th anniversary as an attorney.