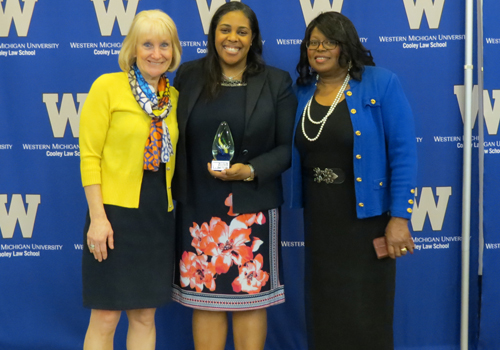 Washington graduated from WMU-Cooley with honors in 2005, and served as an Oakland County assistant prosecuting attorney for over five years before opening her own law firm, Washington Law PLLC, in 2011. During that time, she represented clients in criminal, civil and family matters.

In 2017, Southfield City Council appointed Washington to be the magistrate of 46th District Court. She has tried more than 40 jury trials and is often sought after by other attorneys for trial advice.

During her presentation at WMU-Cooley’s Auburn Hills campus, Washington spoke about her three points to live a life with integrity.

"First, be honest and true to yourself.  Oftentimes, we try to meet the expectations of others.  Find your purpose and identify your goals,” she said. “Second, be kind and make someone smile.  You can always hear, you have to learn to listen with compassion. People will remember us, we can control how people remember us.  Third, define what success means to you.  Integrity is something we work toward every day.  Fulfill your promises, keep your appointments, and learn to say no."

The WMU-Cooley Law School Integrity Award is presented each term to a member of the community who demonstrates a high level of integrity and has a positive influence on the legal profession.