In early 2015, the Michigan legislature enacted a significantly more accessible path to expungement of criminal records for offenders throughout the state. Since then, WMU-Cooley Law School’s Access to Justice Clinic has successfully helped over 60 clients earn a second chance. 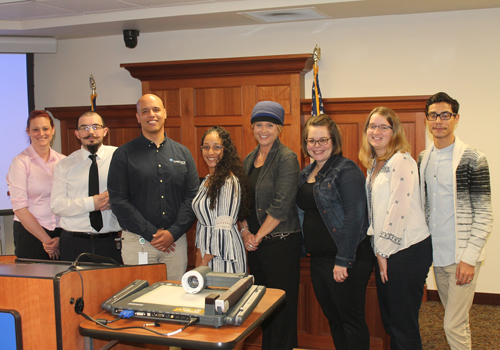 On Wednesday, June 6, two clients of the Access to Justice Clinic shared their stories with students at WMU-Cooley’s Grand Rapids campus. Joseph Gomez and Crystal Lopez had successful outcomes with their cases, giving them each a chance to grow personally and professionally while also re-claiming purpose in their lives.

Gomez’ case involved an attempt at having his driver’s license restored after two significant violations in a three-month period. He was arrested for a DUI in 2007 and three months later was involved in an auto accident that resulted in the death of his passenger. Gomez served five years in prison and after being released in May of 2012, set clear objectives for himself.

“I had to figure out what I needed to do in order to drive again. I knew that was essential to becoming a productive citizen in society again.” After a previously failed attempt for his license restoration, the Access to Justice Clinic took the case for an appeal.

“They did a fantastic job of truly understanding what happened, from beginning to end. I was very impressed, I felt very confident. The team is there with you every step of the way. For morale purposes, that did a lot for me.”

After getting his driving privileges restored, Gomez has been successful at building a career at Grand Rapids-based Cascade Engineering, and has been able to purchase a home.

While working with Lopez, the Access to Justice Clinic was able to have her non-violent felony conviction expunged. In 2005, Lopez was five months pregnant and sought a way for quick money to purchase a bus pass to get to and from work.  She was charged with uttering and publishing, or falsifying documents, and was convicted.

“I was trying to make a couple bucks to get to work, I didn’t know how the individuals asking me to cash the checks had created them. I just knew I could buy a bus pass with the money.”

Lopez attempted expungement on her own, but it proved to be a difficult process and was denied. After hearing about WMU-Cooley’s Access to Justice Clinic, Lopez called for help. The clinic worked with her to make a second attempt at the expungement process.

“It was simple and straightforward, we went to court and the judge signed off on it.”

By having her criminal record expunged, Lopez has been able to find employment outside of the manufacturing industry and now serves as a collections agent and volunteers helping individuals find housing through  HUD’s Family Self-Sufficiency Program.

Both Gomez and Lopez are proud to steer offenders seeking help to the clinic.

Speaking about his experience working with staff and students at the Access to Justice Clinic, Gomez said, “the people here are in your court, they want you to grow and prosper. It gives me a sense of responsibility.”

Similarly, Lopez is thankful to the clinic for their perseverance and credited her children as her ongoing motivation. “I want my kids to remember me as someone who helps people, someone who did her best and gave back to the community.”

Speaking about the impact the clinic has on the west Michigan community, WMU-Cooley Associate Dean Tracey Brame, who is the director of the Access to Justice Clinic, said, “What we have found over the last five years is that our students’ work, in this realm, has been incredibly impactful in the surrounding area. We have now helped over 60 clients and just about every time we go to these hearings, it’s immediately life changing. It really never gets old.”

The WMU-Cooley Access to Justice Clinic provides legal representation to those seeking to expunge their criminal convictions or remove their names from the Department of Health and Human Services’ Central Registry. The clinic also seeks to educate the public generally about issues facing ex-offenders as they seek successful reentry into society, through volunteering at community outreach events, and giving presentations on the topics of expungement and Central Registry name removal. Individuals interested in obtaining services from the clinic can call 616-301-6800, extension 6921.