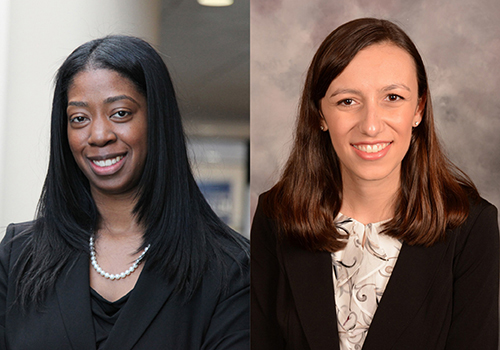 Lanita Carter and Daria Solomon were recipients of the 2020 WLAM Foundation Scholars Award. The scholarship is awarded to women law students who demonstrate leadership capabilities in advancing the position of women in society, including service in: social justice, equality, family law, child advocacy, domestic violence, or work on behalf of underserved areas or populations.

Before enrolling at WMU-Cooley, Carter started a small real estate investment company with a mission to help Detroit families remain in their homes after being subjected to tax foreclosure. Carter was influenced by the economic disparities she witnessed daily and decided to pursue a law degree in order to advocate for individuals subjected to social, economic, and racial injustice. During law school, she served as a judicial intern for the Honorable Victoria A. Roberts, United States District Court for the Eastern District of Michigan and for Magistrate Judge Stephanie Dawkins Davis, now a United States District Court Judge.

In addition, Carter served as president of the Black Law Students Association, law clerk with the Oakland County Inns of Court, Office of Student Assistance representative, grade appeals magistrate; marketing and articles editor of the Law Journal, managing associate editor of the Law Review; and student representative for Equal Justice Works. Born and raised in Detroit, Michigan, Carter will become the first lawyer in her family. She plans to continue to advocate for individuals who have been subject to economic, racial, and social injustice in the Metro Detroit area.

A graduate of Hope College, Solomon studied education and completed her student teaching in Chicago Public Schools. She decided to enroll at WMU-Cooley because of her passion to advocate for students and education. While in law school, Solomon focused her studies in education law and completed her externship requirement at Collins & Blaha, P.C., a firm that represents Michigan school districts.

Additionally, Solomon worked as a teaching assistant for multiple courses at WMU-Cooley, as well as served as a member of law school’s National Moot Court team and as a senior resource editor for Law Review. Solomon now plans to focus her career in the education-law field.