After serving as director for the WMU-Cooley Law School Innocence Project since 2012, Professor Marla Mitchell-Cichon turned the clinic’s leadership over to WMU-Cooley Associate Dean and Professor Tracey Brame effective Jan. 1. Mitchell-Cichon will continue to work with the project on a part-time basis, serving as legal counsel. 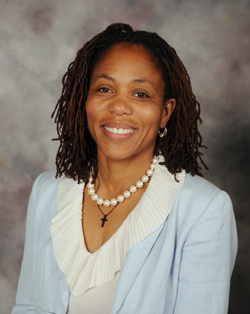 Brame most recently served as associate dean at WMU-Cooley’s Grand Rapids campus and is the director of the law school’s Access to Justice Clinic, which provides legal representation to those seeking to expunge their criminal convictions. She joined WMU-Cooley’s faculty in 2006. Brame is the immediate past president of the Grand Rapids Bar Association and was named 2020 Lawyer of the Year by Michigan’s Lawyer’s Weekly.

“Since the beginning of my law career, advocacy work has been my passion,” said Brame. “It’s an honor assume the role of director for the WMU-Cooley Innocence Project from Professor Mitchell-Cichon, who has spent much of her legal career fighting for the wrongly accused.”

The WMU-Cooley Innocence Project is part of the Innocence Network, which has been credited with the release of over 375 wrongfully accused prisoners through the use of DNA testing. WMU-Cooley’s clinic has screened over 5,800 cases since 2001 and is responsible for the exoneration of Kenneth Wyniemko (2003), Nathaniel Hatchett (2008), Donya Davis (2014), and LeDura Watkins (2017). Additionally, the project assisted in the exoneration of Ramon Ward and Lacino Hamilton through a grant partnership with the Wayne County Prosecutor's Office Conviction Integrity Unit.

Mitchell-Cichon joined WMU-Cooley Law School in 1995, teaching in the Sixty Plus, Inc., Elderlaw Clinic and has worked with the law school’s Innocence Project since 2002.  She has served as the school’s faculty externship coordinator and taught Professional Responsibility and the Wrongful Conviction Seminar.  In 2006, Mitchell-Cichon received the Justice for All Award from the Criminal Defense Attorneys of Michigan. In 2019, she received the Leo Farhat Outstanding Attorney award from the Ingham County Bar Association, the Champion of Justice award from the State Bar of Michigan and was named one of Michigan’s Leaders in the Law.

“Professor Brame will bring experience, expertise and enthusiasm to the work of the project,” said Mitchell-Cichon. “I am proud to have been part of six exonerations. I am especially proud of the positive working relationships we have established with the Wayne County Conviction Integrity Unit and the Michigan Attorney General's Office Conviction Integrity Unit. Michigan is leading the nation in how it reviews and rectifies wrongful convictions and it has been an honor to be part of that.”

WMU-Cooley’s Innocence Project provides legal assistance to persons who are imprisoned for crimes they did not commit. It focuses on obtaining post-conviction DNA testing of material evidence and unreliable forensics. Those interested in donating and supporting the work of the WMU-Cooley Innocence Project can do so at cooley.edu/academics/experiential-learning/innocence-project.