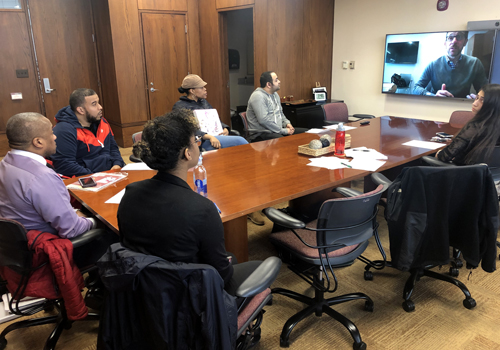 While answering students’ questions, Martin encouraged them to become a pro at networking and find an area of work that they are passionate to serve.

“In the sports industry, it’s all about who you know,” he told the students. “When networking, you should treat people professionally and with respect, which will help build good relationships.”

But building relationships doesn’t stop after the first contact, Martin said. He suggested reaching out to those connections every 6-8 weeks because the sports world is constantly changing.

“Keeping that relationship will ensure that you are always on that person's radar,” he said, also noting the importance of volunteering as a way to continue building relevant people skills.

Martin explained to the students how he made sacrifices, including taking side jobs to earn extra money, sleeping in a friend’s basement and dedicating his weekends to watching hockey games, in order to get into the hockey world. He left a well-paying job at a tax firm in Colorado so he could pursue his dream job in hockey. Martin said he has no regrets and wouldn’t change any of his decisions.

“Without having the passion and desire to make the sacrifices, I would not be where I am today,” he said.

Due to the limited professional teams, Martin recommended working with companies, such as Nike or Reebok, as a way to get a foot in the industry door.

“That way you can be involved with sports, while also having more opportunities and job security in the sports industry,” Martin said, suggesting students take labor and employment law, intellectual property courses, and anti-trust courses in law school to help prepare for the business world of sports. “You should always bring something to the table to stand out or have a significant contact to put you ahead of others.”