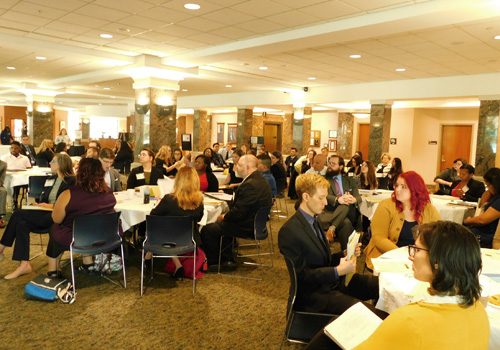 The class is not only named for Brennan Sr., but it is also the first class under WMU-Cooley’s new president, James McGrath.

During the orientation program, John Brennan spoke to the students about their class’s memorable namesake, who was also formerly Chief Justice of the Michigan Supreme Court.

“I’d like to tell you about Thomas E. Brennan as a human being – as my dad – because I think there are some things about him that might be useful to you as you begin this daunting and, certainly, very exciting new chapter in your life,” John Brennan said. He went on to note that his father was always a loyal friend, was generous, sought forgiveness, acted goofy — even writing and singing silly songs in public, and took risks.

“To the Thomas E. Brennan class of Western Michigan University Cooley Law School, I welcome you and wish you all success,” John Brennan told the students.