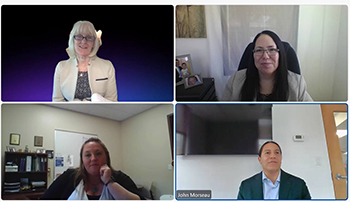 Each panelist gave their personal experience with the legal system within the tribe they represent. Judge Moldando shared that Michigan has the largest Native American population east of the Mississippi River, with 12 federally recognized tribes and 100,000 native people. This includes an urban Indian population with about 50,000 native people located in the Lansing, Detroit and Macomb County area.

“Despite how small we are, and frankly, how limited we are in resources, we spend on average $3 million a year in legal fees and legal services and we're constantly contracting with law firms for those services,” said Maldonado. “We find that we're better served by people that really understand our communities and our differences because our values are not always necessarily the same.”

Morseau discussed the challenges of achieving higher education, including completing law school. “There's a lot of tribes not located near the law schools so you have to make the conscious decision to move away from the community. To do that, it's hard. Knowing that you're going to face a lot of adversity again, in addition to what you had to do as an undergrad. It’s not a welcoming environment in most cases,” he said.

The panel members shared their perspectives on the importance of creating an inclusive culture to increase the ease of making a leap as a student. Rock discussed how the more she had the opportunity to work with other attorneys who knew very little about tribes, the more she was inspired to become an attorney for her people.

The PBS program was produced solely in Michigan where there are 12 federally recognized Native Nations. The documentary takes a look the lives of contemporary Native American role models. It focuses on the under-reported themes of Nation Re-Building, Tribal Justice and Cultural Revitalization. Through the personal and professional stories of American Indian attorneys, tribal judges and their colleagues, Warrior Lawyers provides an overview of the major historical, governmental, legal, judicial and intertwining social issues shaping many federally recognized Nations today.

The full presentation can be viewed on the WMU-Cooley Community Conversation Playlist on our YouTube channel HERE.