The Honorable Thomas E. Brennan, Sr. died peacefully on September 29, 2018 in Lansing, Michigan surrounded by family. He was 89.

Judge Brennan was the founder of Thomas M. Cooley Law School in Lansing. He was also the 81st Justice of the Michigan Supreme Court and the youngest Supreme Court Chief Justice in the history of the State of Michigan. More than any of these significant career accomplishments, Brennan treasured his role as sponsor and mentor to generations of lawyers who attended Cooley Law School, his loving family, and his lifelong friends. To know Brennan was to know his intellect, creativity, charm, quick wit and irrepressible sense of humor always tinged with an Irish glint. 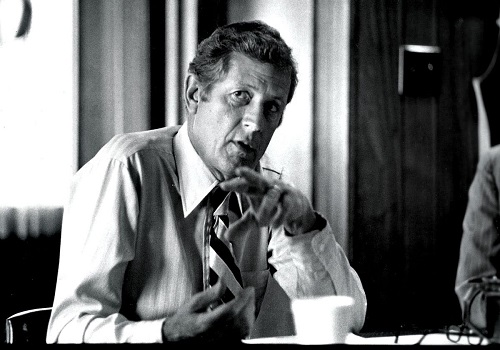 "Tom Brennan was a giant in legal education," said WMU-Cooley's Interim President Jeffrey Martlew.  "More than 20,000 WMU-Cooley graduates owe him a debt of gratitude for pursuing his vision in creating a law school focused on teaching knowledge, skills, and ethics.  Beyond that, Tom had a genuine love for people.  He was a terrific mentor and a true friend, and I shall miss him."

Born on May 27, 1929 in Detroit, Michigan, Brennan graduated from Detroit Catholic Central High School, where he excelled in forensics. He attended the University of Detroit and earned a law degree from the University of Detroit Law School in 1952. In 1951, he married the love of his life, Pauline Mary (Polly) Weinberger, with whom he had six children. Immensely proud of his large Irish Catholic clan, Brennan often involved family in his various professional pursuits, from political campaigns to the inception of the Thomas M. Cooley Law School. He was quick to credit Polly’s invaluable support for virtually all of his success.

Even so, success did not come easily in the early years of Brennan’s political career. He failed two attempts as a candidate for the Michigan House of Representatives in 1952 and 1954, and lost to John Dingell, Jr. for the U.S. Representative from Michigan’s 15th congressional district in December, 1955.

In 1953, he joined the law firm of Waldron, Brennan, Brennan, and Maher, with whom he worked until 1961, when he was elected to a seat on the Common Pleas Bench. In 1963, he was appointed by Michigan Governor George W. Romney to the Wayne County Circuit Bench, and in 1964 he was elected to that same position.

In 1966, at the urging of Governor Romney, Brennan sought the nomination of the Republican Party as Associate Justice of the Michigan Supreme Court. He won the nomination, and the election. In 1969 and 1970, Brennan served as Chief Justice, the youngest Justice to serve in that capacity.

While serving on the Bench, Brennan received numerous requests for law school recommendations which inspired his vision for a new, non-profit law school in Lansing, Michigan. Noting that many qualified students were refused law school admission, he was determined to eradicate academic elitism and make legal education accessible to all capable students. Brennan incorporated Thomas M. Cooley Law School in 1972 with the belief that “An educated citizenry that understands the law is critical to the strength and progress of the nation.” Brennan left the Supreme Court on December 6, 1973, to dedicate his professional career to the fledgling law school and ensure its success. Cooley Law School's founding president until 1975, Brennan also served as its first dean until 1978, when he again became its president, the office he held for 23 more years.

Under his magnetic leadership, Cooley Law School grew from its initial class of 76 students to become the largest accredited law school in the nation. Known for ingenuity and perseverance, Brennan designed and instituted numerous unprecedented innovations, including the law school’s year-round schedule that allows three new incoming classes each year. He is credited with founding the Cooley Legal Authors Society, the Student Bar Association, the Scholastic Review Board and the Thomas M. Cooley Law Review. He also composed the law school’s alma mater.

Combining insight and levity, Brennan was a captivating orator and engaging storyteller. He authored a self-published novel entitled "The Bench" in 2000, a memoir called "Starting a Law School" in 2007, a book entitled "The Article V Amendatory Constitutional Convention: Keeping the Republic in the Twenty-First Century" in 2014, and a blog, "oldjudgesays," which ran from 2008 to 2017. New ideas energized Brennan, whether he was striving to establish a United States Constitutional Convention or trying to develop an American Golf League. An avid golfer, Brennan made a hole-in-one on five lucky occasions.

"I can only say how lucky and blessed I was to have had the mentorship and encouragement of one of the greatest men that I have ever known," said Lawrence P. Nolan, chair of WMU-Cooley's board of directors and recent president of the State Bar of Michigan. "Those of us who knew Judge Brennan understood that there were no limits to his dreams. His dreams became our dreams.  His dreams made it possible to dream and succeed.  Tom's greatest dreams of living a life that was full of grace, truth, and spiritual beliefs inspired all of us to become better people and live fuller lives."  Click here for Mr. Nolan's complete statement on Judge Brennan's passing.

"Thousands of Cooley lawyers and hundreds of present and past Cooley employees, as well as all who participate in a renewed downtown Lansing, owe an immeasurable debt of gratitude to Tom Brennan," said Don LeDuc, recently retired President and Dean of WMU-Cooley Law School, who was Judge Brennan's immediate successor from 2002 to 2018.  Click here for former President LeDuc's complete statement on Judge Brennan's passing.

Online obituary can be found here.