WMU-Cooley Law School partnered with the Grand Rapids Bar Association during this year’s Law Day event.  During the program, the law school announced that James Redford, former Kent County Circuit Court judge, is this year’s recipient of the Marion Hilligan Public Service Award. In addition to the award, a panel discussion was held regarding “Miranda rights.” 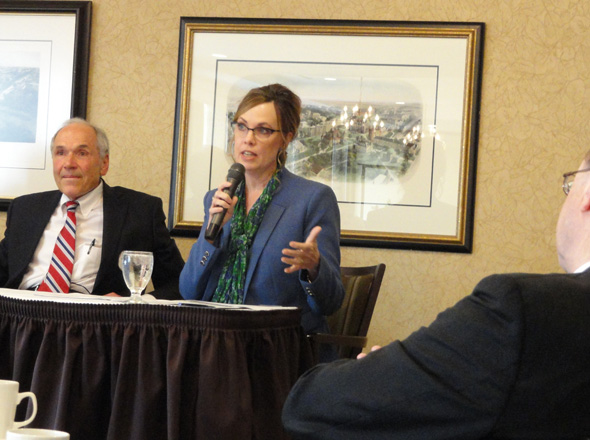 Miller recognized Redford for his service as a judge for the Kent County Circuit Court from 2002-2014, and for his recent appointment by Michigan Governor Rick Snyder as director of the state’s Veterans Affairs Agency. During his presentation Miller said, “Redford began his public-service career in the military, Navy branch, taking risks and making sacrifices in the nation’s defense that too few lawyers can claim, and for a period of 28 years. His accomplishments are only brief highlights of a very much more distinguished public-service career.”

During the discussion, panelists discussed how juveniles and individuals with special challenges are disproportionately affected by current interrogation technique, known as the “Reed technique,” and how many people succumb to confessing to crimes that they didn't commit from its use.  Krause-Phelan encouraged the adoption of the “peace technique,” a technique widely used in Europe, which she describes as letting the person talk.