Oakland County Circuit Court Judge Kwame Rowe was the featured speaker during WMU-Cooley Law School’s annual event honoring Juneteenth. Rowe, a WMU-Cooley graduate and only the second African American male to serve on the Sixth Circuit Court’s bench, spoke about the importance of Juneteenth and having diverse representation in the legal system. (WATCH THE PRESENTION HERE). 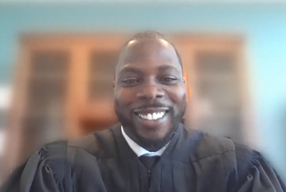 Rowe spoke about Juneteenth, which commemorates the anniversary of the announcement proclaiming freedom for enslaved people in Texas. He talked about the origins of what is now a federal holiday.

“I will note that the 13th amendment was not passed by Congress until January of 1865 and it wasn't until June of 1865 that slaves had learned that slavery had been abolished,” said Rowe. “This entire time, they were subject to slavery, subject to caring for their masters, subject to the conditions of slavery, when in fact there was a proclamation that said that this should not be going on. It wasn't until June 19th that they found this out.  The following year, June 19th of 1866, the free slaves celebrated what was known as Jubilee Day, and they celebrated by singing, dancing, barbecuing, and other things to celebrate their freedom.”

Rowe explained the importance of  Juneteenth by sharing a quote by former President Barack Obama, “’Juneteenth has never been a celebration of victory, or an acceptance of the way things are. It is a celebration of progress. It is an affirmation that despite the most painful parts of our history, change is possible and there is still so much work to do.’”

As an attorney and judge Rowe shared stories about building trust in the legal system and shared that only 5 percent of all lawyers are black, a statistic that, according to the American Bar Association, has stayed the same since 2010.