Ingham County Circuit Court Judge Rosemarie Aquilina was the featured speaker during WMU-Cooley Law School’s Sexual Assault Awareness Month Community Conversation, titled “How to Recognize Sexual Assault – and Take Action.” Aquilina made news worldwide for her work presiding over the sentencing of disgraced former sports medicine doctor Larry Nassar. Aquilina is known for her reputation for outspoken advocacy and giving those in her courtroom a voice. 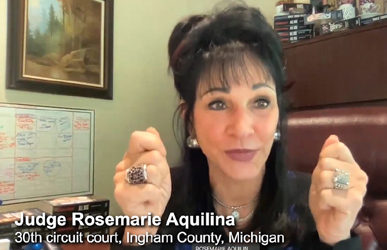 During the April 14 presentation Aquilina spoke about the signs of sexual assault and how individuals can recognize if they or someone they know are a victim. She will also explain steps for getting help if one has been a victim of assault.

Aquilina started her conversation by saying, “sexual assault and domestic abuse need to be eradicated.” She said that once of the things she has learned throughout her life, and in practice, is that without a voice there’s no choice and there is no change.

“I’m never worried about consequences to me for speaking up, instead I’ve made a conscious decision to speak up and take action,” said Aquilina.

While sharing how individuals can help someone suspected of being in abusive situation Aquilina said, “If you are able to speak with someone who is in an abusive situation, make sure they know they matter, they’re worthy of being treated better, they’re worthy of being treated each and every day with kindness and respect. Offer to take them to a safe place.“

A survivor of abuse spoke during the presentation about her abuse in New York state by a member of the clergy. She spoke about the importance of coming out publicly to help other victims.