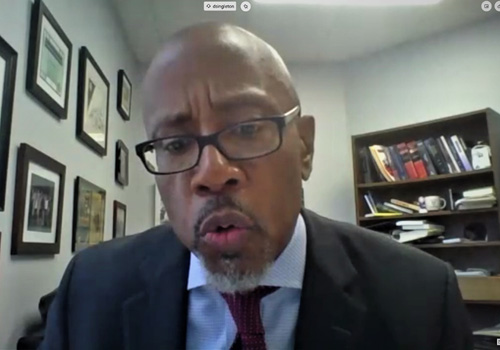 The discussion was moderated by WMU-Cooley Associate Dean and Constitutional Law Professor Michael C.H. McDaniel, who opened the discussion by talking about Dr. Martin Luther King Jr.’s “I Have a Dream” speech from August 1963 at the Lincoln Memorial.

Singleton, whose organization’s mission is to create a fair, intelligent, redemptive, criminal-justice system through zealous client-centered advocacy, innovative policy reform, and cross-sector community education, spoke about the importance of the 13th Amendment.

"I think the focus on the 13th Amendment, while important, misdiagnoses the cause of mass incarceration," stated Singleton during the Constitution Day Community Conversation virtual event. "Mass incarceration and slavery are not the same. Both are different forms of racial oppression. I think if we were to close the loophole or exception today, we would still have mass incarceration."

Floyd, an associate attorney at Koonz McKenney Johnson & DePaolis LLP, discussed the need for change in criminal sentencing and who could be blamed for disparities. He said there is a stigma associated with black attorneys being prosecutors and those individuals are sometimes shamed by their colleagues. Floyd said that deters black attorneys from becoming prosecutors.

“I have several black colleagues who are prosecutors, and even when I was thinking about being a prosecutor myself, I got into similar discussions with others who said ‘are you sure you want to do this? Are you sure you want to put black people away?’ The first thing I was thinking was well that’s the job, but it’s just not me going to be putting black people away, it’s going to be me putting the defendant away.”