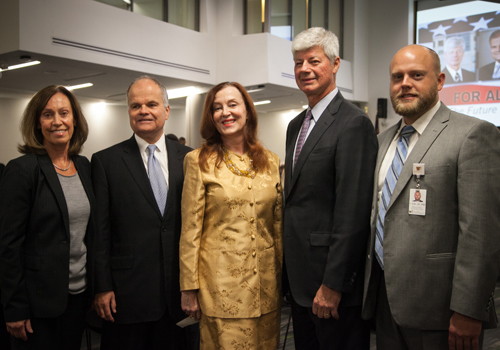 Stupak who recently authored “For All Americans: The Dramatic Story Behind the Stupak Amendment and the Historic Passage of Obamacare,” provided the keynote to an audience of nearly 200.

He started off by saying he believes “healthcare is a right for all Americans and not a privilege for those few people who can afford it.”

Continuing the conversation regarding health insurance in today’s environment, DeMoss told the audience that it is complicated to talk about everything connected to healthcare and healthcare reform under the Affordable Care Act.

“We are talking about multiple markets involving different products sold in different states, each of which has a different regulatory environment,” said DeMoss “It is hard to universally characterize what the state of healthcare is today across the market, but we are a market characterized by uncertainty.”

Falahee explained how Kalamazoo’s Bronson Hospital is dealing with the uncertainty. “What’s going on in Washington, or Lansing, or any other state capital really has no impact and should have no impact on the bedside care,” said Falahee. “Hospitals should care about right care, right place, right time, quality, access and cost.”

Gibb said the healthcare debate focuses on the patient’s experience, but the public should hear more about the needs of the provider.

“We tell physicians from day one, when they put on that white coat, they have promised something to society. We expect physicians to be competent, educated and compassionate while delivering the right kind of care at the right time,” said Gibb. “We often forget what our obligations to healthcare providers are. We promise them a functioning system, and right now our healthcare system is not functioning to the benefit of our healthcare providers.”