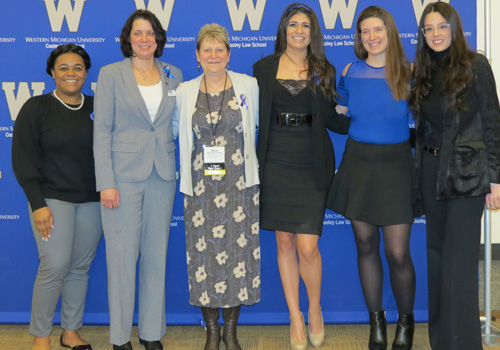 Baumer was in the process of adopting her then 5-month-old nephew. That October, Baumer took him to the emergency room because he wasn’t eating. After a series of tests at a local children’s hospital, doctors eventually discovered bleeding in his brain. A few days later, the sheriff’s office called Baumer to come in for questioning. She was compliant with the sheriff’s request, unaware she would be interrogated or need an attorney.

It was only later that Baumer realized she was the primary suspect in a child abuse case. She was formally charged with first degree child abuse in February 2004. Her case was tried in August 2005, and five weeks later, Baumer was convicted and sentenced to 10-15 years in prison. She maintained her innocence the entire time.

“It just absolutely floored me,” Baumer told WMU-Cooley students. “I knew my innocence. My family knew my innocence. I couldn’t see how two doctors’ testimony and no other evidence made all the difference. It was unimaginable, but it happened.”

Baumer immediately began appealing her case while in prison. After her second appeal was denied in September 2007, Baumer and her family started to lose hope. With the help from the Michigan Innocence Project, Baumer was able secure a new trial. At the trial, her lawyers presented several expert witnesses to testify on her behalf. This new evidence established that Baumer’s nephew had not suffered from shaken baby syndrome, as originally believed, but rather Cerebral Sinovenous Thrombosis, a form of childhood stroke that caused the brain hemorrhage.

On Oct. 15, 2010, the jury acquitted Baumer and she was released at the age of 33 after serving nearly five years in prison. To this day, she has never received a formal apology from the state.

“Her case demonstrates what can go wrong in the American legal system when pride and ego get in the way of what is right and just,” said Maria Lowry, student president of the WMU-Cooley Auburn Hills Criminal Law Society, which organized the event. “During her second trial, Baumer’s defense lawyer testified that he hadn’t been knowledgeable enough about the medical aspects of her case to provide her with an adequate defense, just one of the many factors that led to her wrongful conviction and imprisonment.”

In 2016, Michigan passed a bill stating that individuals who have been wrongfully convicted, who later have their convictions overturned, are eligible to receive $50,000 compensation for each year that they were imprisoned.