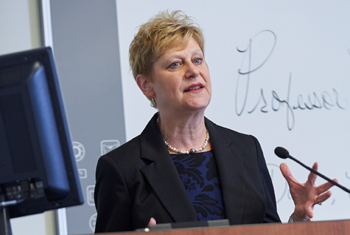 Mitchell-Cichon joined Rep. Tyrone Carter (D-Detroit), other Innocence advocates, and Michigan exonerees, who collectively spent 52 years in prison for crimes they did not commit, as they shared their stories and discussed new legislation that would allow for greater police transparency.

Carter, who hosted the discussion, introduced co-sponsored bipartisan legislation on Feb. 18 that would require police departments to release files of disciplined police officers requested under the Freedom of Information Act, or during court cases. The legislation would allow for public access to all police misconduct records through FOIA, which would strengthen accountability, and offer police departments transparency during their hiring process to help prevent misconduct that contributes to wrongful convictions in Michigan.

Since its inception in 2001, WMU-Cooley’s Innocence Project has used DNA evidence to prove the innocence of seven convicted prisoners in Michigan — “and six of those seven involved police misconduct,” Mitchell-Cichon said.

“This is a critically important issue in the criminal justice system,” she added.